Whenever Donald Trump embarks on some foreign escapade, the prospects for his creating an international incident are impossible to ignore. Case in point, he just returned from Japan where he launched a political attack on Joe Biden, a potential election opponent, in violation of the diplomatic maxim that “politics stops at the water’s edge.” Even worse, he cited his murderous friend and dictator, Kim Jong Un, to reinforce the infantile insult he aimed at Biden’s intelligence. 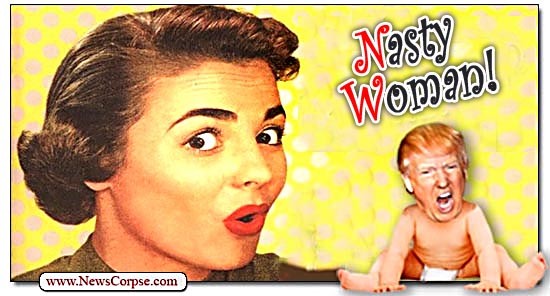 That was last week, This is now. Trump is heading next to the U.K. And he has outdone himself by embarrassing America before he even got there. In an interview with a British newspaper Trump responded to a question about some critical remarks that Duchess Meghan Markle made about him in 2016. Claiming ignorance (which is believable), Trump replied “No, I didn’t know that she was nasty.”

It’s bad enough that Trump would malign an American member of British royalty in comments to the English press, but Trump only made matters worse by later denying that he ever said what he is on video saying. He really does believe that his glassy-eyed disciples will obey his edicts to ignore their own eyes and ears and listen only to what he tells them. He tweeted that…

I never called Meghan Markle “nasty.” Made up by the Fake News Media, and they got caught cold! Will @CNN, @nytimes and others apologize? Doubt it!

Never mind the video evidence of his childish trash talk. Trump has his own version of reality cultivated from decades of self-delusion and narcissistic indulgence. And it’s especially comical that Trump thinks he’s entitled to an apology from the press that correctly reported precisely what he said. His behavior is completely in line with his past where his tendency to disparage women as “nasty” has been demonstrated over and over again. For instance:

Hillary said such nasty things about me, read directly off her teleprompter…but there was no emotion, no truth. Just can't read speeches!

The arrogant young woman who questioned me in such a nasty fashion at No Labels yesterday was a Jeb staffer! HOW CAN HE BEAT RUSSIA & CHINA?

I gave a woman named Barbara Res a top N.Y. construction job, when that was unheard of, and now she is nasty. So much for a nice thank you!

Pocahontas is at it again! Goofy Elizabeth Warren, one of the least productive U.S. Senators, has a nasty mouth. Hope she is V.P. choice.

Clearly Trump is comfortable characterizing strong, independent women as “nasty” just for daring to challenge his chauvinistic misogynism. That’s a sign of a pitifully weak man who is afraid of honest encounters with people who obviously have more intelligence and integrity. But just for the sake of balance, it should be noted that Trump has also cast the same insult at some of his sycophantic male suck-ups:

Nasty Ted Cruz is at it again- same dirty tricks he used w/ @RealBenCarson– saying I may not be on ballot & I hold liberal positions. LIES!

Failed presidential candidate Lindsey Graham should respect me. I destroyed his run, brought him from 7% to 0% when he got out. Now nasty!

This is the humiliation that America is currently having to endure for the sin of allowing this cretin to get anywhere near the White House. His petulant antics would shame a twelve year old. But Trump is apparently impervious to shame. It’s that unique immunity that allows him to lie, cheat, insult, whine, and generally behave in a manner that really can only be described as pretty damn nasty.

LATE ADDITION: This is on surprise. Trump has now added House Speaker Nancy Pelosi to the list of women he says are “nasty.”

5 thoughts on “Despite Preposterous Denials, Trump Has a History of Calling People (Particularly Women) ‘Nasty’”