There has not been a more obvious case of penile obsession than that exhibited by Andrew Breitbart and the pervs at Fox Nation. Since the non-story about Anthony Weiner’s alleged Twitter escapade, these alleged “news” sources have maintained a frenzied focus on it. Despite the utter lack of verifiable evidence, the Fox Nationalists have posted FOURTEEN articles on the subject: 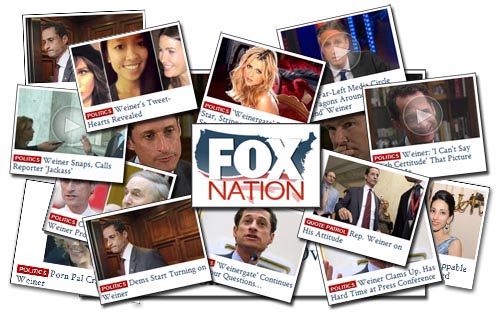 That’s fourteen separate articles on this one issue that hardly compares to the urgency of other matters currently in the news cycle. The second most reported story on Fox Nation, with two whole articles, was the Palin/Trump pizza summit. They sure know their priorities.

As for Andrew Breitbart, he puts Fox Nation to shame. It has now been four days since the story broke and Breitbart’s BigGovernment blog still features it in a big way. In fact, EVERY SINGLE HEADLINE on the site is Weiner-related. There is no other story (with the exception of Breitbart’s lame book) that warrants a headline on that pseudo-news site. 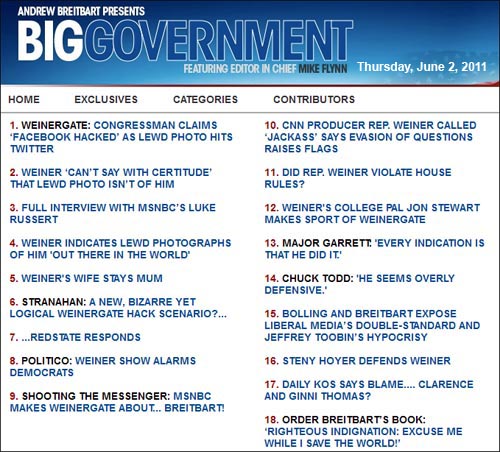 I know these weasels live to smear their liberal adversaries, but this ridiculous. When Americans are desperate for information about pressing issues concerning jobs, the economy, health and Medicare, and national security, the rightist media is glued to titillating irrelevancies. Weiner is one Congressman from New York who is not even a member of the Democratic leadership. He is in a heavily Democratic district that would likely elect another Democrat if the worst case scenario were to occur and he left office. The GOP has little to gain from hyping this other than to remind people of the verifiable incidents of Republican malfeasance in office.

So why are they doing it? Because they are being hurt so badly by their own news that they are desperate for a distraction. Their presidential candidates are a laughing stock, even amongst Republicans. And their budget plan that kills Medicare is unpopular with every sector of the electorate, including conservatives and Tea Partiers. They are in a rapid meltdown and they think that this will save them. Thus the fixation that blots out every other news story for these losers. Pathetic.

10 thoughts on “Fox News And Andrew Breitbart Have Weiner Envy”