Donald Trump had several weeks to plan his return to the campaign trail after three months of a COVID-19 enforced lockdown. He chose Tulsa, Oklahoma, a deep red city and state that should have guaranteed a capacity crowd of glassy-eyed disciples. but things didn’t work out exactly as planned. 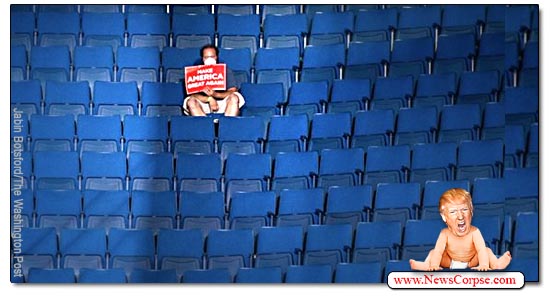 According to the Tulsa fire department, Trump’s rally managed to pack in a measly 6,200 of The Donald’s dimwitted devotees. That’s less than a third of the 19,000 people the arena can accommodate. What’s more, Trump and his campaign bragged repeatedly about having a million requests for tickets and they projected that there would be an overflow crowd of 40,000-60,000 out side the arena where Trump would give an additional speech.

However, the attendance turned out to be far less than projected. The overflow crowd never materialized at all, leading to the cancellation of the outdoor activities. If Trump thought that this rally would be his opportunity to turn around his polling slump (he’s losing to Joe Biden in every national poll, as well as in the crucial swing states), he must be mighty disappointed this morning. And his disappointment generally translates into fury directed at the “losers” responsible for his humiliation. Because, of course, it’s never him.

On Sunday morning Trump campaign advisor Mercedes Schlapp was interviewed by Chris Wallace on Fox News Sunday. She was there to attempt to put a positive spin on the previous evening’s fiasco. That plan didn’t work out very well either (video below):

Wallace: Your campaign said that more than a million people wanted tickets to this rally, but we all saw the pictures last night. The arena was no more than two-thirds full, and the outdoor rally that had been planned for the overflow crowd was canceled because there was no overflow crowd. Question: What happened?
Schlapp: When it comes to understanding how the rallies work, it’s a first-come-first-serve basis. Basically what the one million RSVPs include, it’s an opportunity for us to gather data, to get information obviously.

Schlapp went on to make absurd excuses about people having been too frightened by protesters to show up. But she didn’t explain how more than 90% of the predicted hundred thousand rally-goers were scared off by a few protesters, who were kept blocks away from the arena by the police. She also bragged about the number of people who watched online which, of course, included many Trump opponents and other curious independents. To his credit, Wallace wouldn’t let Schlapp deflect, and reminded her that Trump is always talking about the attendance at his rallies as a measure of his popularity. But now he isn’t popular enough to draw supporters in the right-wing hothouse of Oklahoma.

Wallace also disputed Schlapp’s false assertion that protesters prevented anyone from attending. Schlapp actually wants people to believe that Trump’s supporters stayed home because they didn’t want to expose their families to protesters. But exposing them to a deadly virus apparently wasn’t a problem.

More importantly, Schlapp’s reply to Wallace revealed what she considered to be the primary objective for the rally and the reason it should be regarded as a success. “It’s an opportunity,” Schlapp admitted, “for us to gather data.” Indeed it is. Everyone who requests a free ticket to the event is required to provide their name and other personal identification. That’s all entered into a database that is later used to contact potential voters. Trump’s campaign chairman, Brad Parscale made the same admission prior to the Tulsa affair, tweeting that this would be the “Biggest data haul and rally signup of all time.”

There’s just one problem. There are reports that an army of Tik-Tok users requested tickets that they had no intention of using. It’s hard to estimate the precise impact of this Trump trolling project, but there were thousands of interactions with the prank on social media. So somewhere between the 6,200 people who showed up at the rally, and the million who allegedly requested tickets, there an untold number of fake respondents. That means that there is a significant amount of fake data currently residing in the Trump campaign database. And that’s on top of the fake data that was there before this event. [NOTE: News Corpse is in that database, despite never having provided any information] So when the campaign begins its voter outreach they will be wasting huge sums of money and effort on ghost voters.

In the end, the legacy of the Tulsa rally will be that it revealed the softening support for Trump’s reelection, while simultaneously flooding his campaign database with bogus info. But at least he had the opportunity to soak up some cheers from his hardcore fans, while reinforcing his reelection themes of being able to drink water with one hand, stopping coronavirus testing, and defending Confederate statues. WINNING?

"You guys were so far off that you had planned an outdoor rally, and there wasn't an overflow crowd … the fact is, people didn't show up" — Chris Wallace grills Trump campaign spokesperson Mercedes Schlapp on Trump's underwhelming Tulsa crowd pic.twitter.com/1wdWK7Cpta