The commitment by Fox News to gaslight America is among the most conspicuously dishonest campaigns of flagrant falsehoods ever contrived by an alleged “news” enterprise. Their relentless avalanche of lies and shameless promotion of liars is Olympian in its scale and ambition. 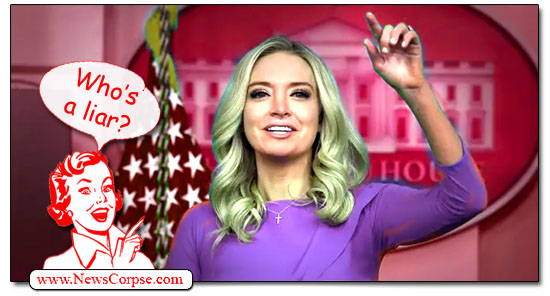 The most recent evidence of Fox’s fantastical fib factory came on Tuesday evening when Donald Trump’s former press secretary (now employed by Fox News), Kayleigh McEnany, guest co-hosted on The Five and participated in a discussion about President Biden’s first few months in office. Her preposterous remarks were an exhibition of either her utter aversion to truth-telling, or stage 4 acute amnesia. She babbled that…

“We are eight months into a Biden presidency. Jesse. Wrap your head around that. We still have three years and four months left. Look, when President Trump was President, you didn’t see crisis after crisis. You just didn’t see it.”

Kayleigh: When President Trump was President, you didn’t see crisis after crisis. pic.twitter.com/pipF8GWbBg

What the Holy F**k? Even after four years of unabashed lying by Trump – who set an unchallengeable record of more than 30,000 lies – it is still startling to hear such malignant mendacity coming out of even a professional deceiver’s mouth.

The reality of the crisis-stained Trump administration is so thoroughly contrary that it’s hard to believe that McEnany could allow those words to escape her perfidious piehole. What follows is a necessarily abridged archive of Trump’s catastrophes:

And that’s only a partial list. Meanwhile, Joe Biden has…

And Biden is currently getting the U.S. out of the twenty year long Afghanistan war that Trump fumbled so badly. Yet somehow, to McEnany and Fox News, it’s Biden who is burdened with crises? Put down the pipe Kayleigh.

3 thoughts on “SRSLY? Kayleigh McEnany Tells Fox News There Were No Crises When Trump Was President”