Tuesday night America, and everything that it stands for, was viciously attacked in an unspeakably despicable act of violence. At least that’s what Fox News wants you to believe. And it’s far more than random vandalism. This time “It’s personal to you. It’s personal to us.” 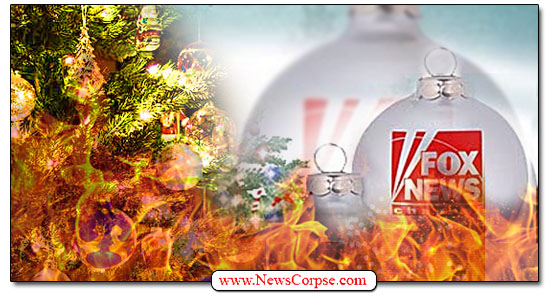 The latest “Crime of the Century” according to the “Curvy Couch” potatoes of Fox and Friends was the torching of the Christmas tree installed in front of their Manhattan office building. ABC News reports that…

“A large Christmas tree outside Fox’s Midtown headquarters was set ablaze early Wednesday by an arsonist who was quickly taken into custody. […] Police say the 49-year-old suspect climbed up ‘the metal superstructure’ — the tree is an artificial sculpture that is shaped to look like a tree — lit papers he brought with him on fire, and shoved the papers into the tree structure.”

Let’s just set aside the metaphorical relevancy of the Fox News Christmas tree being a “fake.” This act of arson has much greater symbolic meaning to the Fox News crew. This burning Xmas bush has stirred more fury among these martinets of virtue than Donald Trump’s attempted coup, the January 6th insurrection, or the COVID death toll. Co-host Ainsley Earhardt expressed her outrage saying that…

“This is an American icon. This is our Christmas tree. Someone setting fire to it. What is happening to our country? It is so terrifying as a mother and someone who loves this country and loves the red, white, and blue. What is happening.”

That’s right. The artificial “metal superstructure” adorning the plaza in front of Fox’s headquarters is the embodiment of everything that is American. And it’s reduction to ashes is roasting her chestnuts. Because…

“It’s a tree that unites us. It brings us together. It’s about the Christmas spirit. It is about the holiday season. It’s about Jesus. It’s about Hanukkah. It is about everything that we stand for as a country: Freedom and being able to worship the way that you want to worship. It makes me so mad. […] I hope we build it back bigger and better.”

Wait up. Now Earhardt is signing on to President Biden’s “Build Back Better” plan, but only with regard to a corporate promotional tree? And since when is a Christmas tree “about Hanukkah”? That one is going to need some explaining. But Earhardt is yearning for explanations as she ponders “What is happening to our country?” Apparently this criminal mischief is representative of more alarming adversities in America than just fiery religious symbols. Like maybe gay Legos, or the alleged Santa shortage.

During the segment, co-host Steve Doocy asked “Who set the Christmas tree on fire?” Never mind that the NYPD had already arrested a suspect who appears to be a mentally challenged homeless man. If Doocy is still looking for a guilty party, he need look no further than Fox’s messiah, Donald Trump, who is reported to have said that he intends to “wreck Fox News.” Trump has been bashing Fox for months because they haven’t been sufficiently behind his “Big Lie” that the 2020 presidential the election was “rigged” and “stolen” from him. And another suspect could be the MyPillow guy, Mike Lindell, who recently staged a rather pathetic protest in front of Fox’s office. (UPDATE: Fox News still can’t quit their fixation on this tree arson catastrophe)

Nowhere is the animosity toward Fox News more fierce than among the Trump Cult, who still believe that Fox called the Arizona election results for Biden prematurely. So any of Trump’s dimwitted disciples could be considered suspects. And rest assured that Newsmax or OAN will get Rudy Giuliani on the case any day now. In the meantime, enjoy this amusing holiday carol that really hits the right note:

Thank you FOX NEWS for making this a truly Merry Christmas.

One thought on “Fox News Says They Will ‘Build Back Better’ After Their Christmas Tree Fire – No, REALLY!”