Christmas in 2021 is the second holiday season that is burdened by the COVID pandemic. And yet, the enduring spirit of the American people shines through the gloom and casts a glow of hope for better days ahead. It is that persistence of optimism and compassion that inspires a weary nation to persevere and even celebrate good fortune as we find it. 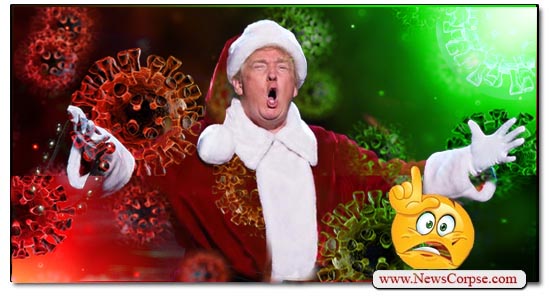 However, that doesn’t mean that there aren’t Grinches around who seek to rain on our parades. They are mostly impotent purveyors of pessimism and selfish, parochial interests. And leading the March of the Misanthropes is the one and only (thank god) former reality TV game show host, Donald Trump.

On this day of merrymaking and family festivities, Trump felt compelled to post a video (via his Twitter ban defying spokes-shill) of President Biden and the First Lady taking heartwarming phone calls from children about the NORAD Santa Tracker. But instead of a joyful clip that honored the occasion, Trump chose one that featured a reference to a vulgarity aimed at the President.

Everyone knows by now that the phrase “Let’s go Brandon” is used by Trumpian trash as a euphemistic substitute for “F**k Joe Biden.” And Trump thought it was appropriate to showcase this crass expression during a Christmas event with kids. How charming and mature of him. At least Biden kept the spirit of the season wholesome by blithely dismissing the profane insult and continuing the jolliness.

In addition to that depraved display of decadence, Trump also posted his own personal wishes for a merry Christmas. At least he took the time to… Oh wait. It turns out that Trump’s Christmas message was actually the same one he delivered last year placed over video that mostly exalted himself. Here is his “new” message for 2021:

And here are his remarks at the national Christmas tree lighting of 2020:

Apparently Trump couldn’t be bothered to come up with anything new to say that was heartfelt and relevant to what’s going on now. This recycling of used blessings is more in line with a war on Christmas than a celebration of it. It’s the sort of disdainful attitude that is presented by Trump’s Ministry of Propaganda (aka Fox News) every year at this time. This year Fox News observed the reason for the season by reporting on a Santa shortage and the national travesty of their fake Christmas tree burning down. They are always such an abundant source of holiday cheer.

Nevertheless, in the spirit of the season, News Corpse would like to continue its holiday tradition by presenting a musical gift that is truly inclusive and welcoming. This is for all of those who are not huddled around a dead tree today, buried in colorfully wrapped packages. It’s for the cynics who won’t accept the notion that the birth of a messenger of peace and love is an excuse to exchange material goods or fruitcakes that nobody likes. It is for the forsaken and forlorn, the outcasts and rebels and nonbelievers who are puzzled by the greed and commercialism that permeates the season. And yes, it’s for those who still believe that peace and goodwill are morally superior to profit and oppression. Here is Miles Davis and Bob Dorough performing the heartwarming traditional Christmas ballad Blue Xmas: