The Keystone XL oil pipeline was one of the most controversial issues of 2011. The project has raised concerns amongst environmentalists, labor unions, and the oil industry. President Obama kicked the matter down the road by delaying a decision until after the 2012 election in order to have more time to study the environmental impact and alternative routes.

Throughout the year, Fox News has openly sided with oil industry interests in favor of expediting the pipeline. They have repeatedly aired segments with proponents falsely claiming that the project would create anywhere from 20,000 to a million jobs. (Opponents note independent studies that place the figure closer to 6,000 jobs that are mostly temporary).

This morning Fox News escalated the public relations campaign on behalf of big oil. Megyn Kelly (the female Glenn Beck) conducted an interview with Jack Gerard, the president of the American Petroleum Institute, a lobbying association. Just to be clear, this was not a Republican congressman who supports the project. It was not a director of a citizens group. It was not a labor spokesman representing the interests of workers. It was a paid lobbyist for the oil industry. Can you guess what position he took?

This is just another example of Fox serving the interests of wealthy corporations (and advertisers) at the expense of actual people who will have to live with the consequences of these projects. There was no spokesperson for the other side of the debate. It was a segment devoted solely to giving free air time to an industry public relations executive.

And, by the way, here is how the matter was handled by Fox Nation: 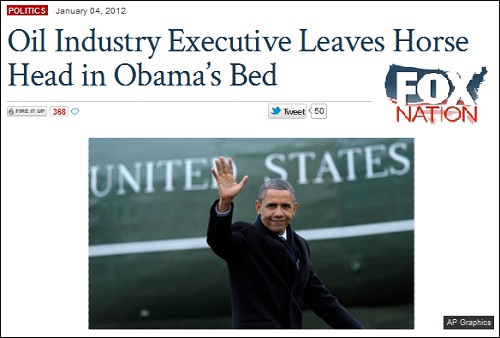 For those who don’t recall, the symbolism of a horse head in bed comes from a gory scene in the film “The Godfather.” It was done as a warning to the victim that he and anything, or anyone, that he cared about could end up the same way. Therefore, the Fox Nationalists are suggesting that Obama or his family could be slaughtered by oil barons if they do not submit to their demands to approve the pipeline.

In the most generous interpretation, it could be assumed that all Fox meant was that there would be “political consequences” for his refusal to kneel before Big Oil. However, the “horse head” imagery was entirely the work of Fox News. It was never mentioned in the article from The Hill that Fox used as its source.

So you cannot blame the oil industry lobbyist for this offensive and hostile rhetoric. It is the sole responsibility of Fox News. Remember that when anyone suggests that Fox has had a course correction and is attempting to moderate their radical and dangerous extremism.