The top-of-page headline at Fox Nation today is a report that falsely declares that “Obama Poll Numbers Drop After Court Upholds His Law.” 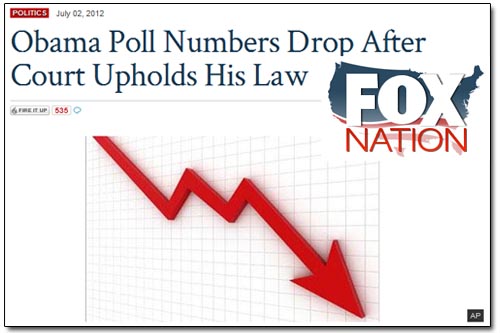 The poll to which the Fox Nationalists refer is from the notoriously GOP-slanted Rasmussen Reports. Rassmussen is best known as a Republican shill. He attends GOP conferences and is a fixture on Fox News. His findings invariably favor right-wing politicians and policies.

As a demonstration of just how far afield he is, take a look at the most recent polls posted on RealClearPolitics: 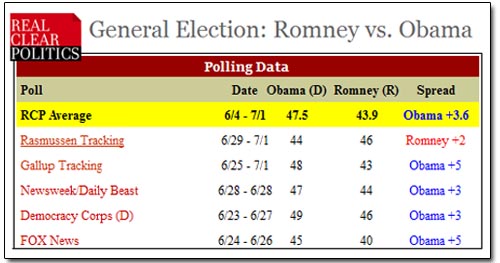 Notice that Rasmussen is the only one that shows Romney in the lead. What’s more, in every poll taken since the the Supreme Court’s ruling on the health care bill, Obama’s numbers have gone up – not down. And that includes the poll from Fox News.

So Fox News promotes the results of a poll by Rasmussen even over their own poll. That’s how committed they are to deceiving the blockheads who watch their network of lies.