On today’s Fox News Sunday, fill-in host John Roberts appeared to be filling in for Mitt Romney’s press secretary. Roberts conducted an interview with Democratic National Committee Chair Debbie Wasserman-Shultz that was more debate than journalism. He countered her remarks as if he were making the case for Romney rather than merely asking challenging questions. Some of his reactions to her comments were not even questions at all, but rebuttals.

But that doesn’t even compare to how Fox Nation mangled their presentation of the interview. The Fox Nationalists posted a 32 second clip of the segment with the headline: “DNC Chair “Happy” With 8.2% Unemployment.” 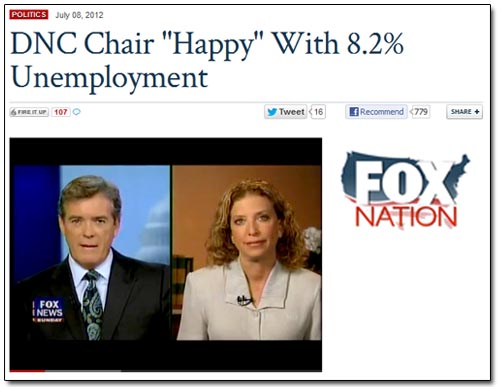 There was only one small problem with that characterization. It is contrary to the truth in every aspect. Even worse, the video that Fox Nation posted to support their headline proves that the headline is a lie. Here is the transcript of the segment:

Fox Nation is so wedded to their mission of dishonesty that they will even post videos that disprove their own lies. Now that’s commitment.

Bonus Item: Also appearing on Fox News Sunday was RNC Chair Reince Priebus (whose name spells “RNC PR BS” if you remove the vowels). In a discussion about Romney’s record of eliminating American jobs and replacing them with labor in foreign countries, Priebus dropped what he must have thought was a clever soundbite: “The only job we’re going to outsource is Obama’s.”

So Priebus is suggesting that the Republican Party is planning to nominate a president based in India or China or some other off-shore location. That would fit perfectly with the GOP agenda of free market capitalism. I bet you could get someone to serve as president much cheaper by going off-shore. But where would that leave Romney? I suppose he could join his bank accounts in the Cayman Islands and then qualify as an outsourced candidate.

2 thoughts on “Fox Nation vs. Reality: The Happy DNC Chair”