The Making of a Meme
Just in case anyone is wondering where Mitt Romney came up with the data behind the contemptuous affront he leveled at half of the population that he hopes to serve as president, it is a tenet of conservative philosophy that has been expressed repeatedly by pundits and politicians alike, although rarely with such disdain. Here is what Romney, a man who accuses President Obama of being divisive, told a roomful of wealthy donors:

“There are 47 percent of the people who will vote for the president no matter what. All right, there are 47 percent who are with him, who are dependent upon government, who believe that they are victims, who believe the government has a responsibility to care for them, who believe that they are entitled to health care, to food, to housing, to you-name-it. That that’s an entitlement. And the government should give it to them. And they will vote for this president no matter what…These are people who pay no income tax.”

The erroneous charge concerning an alleged 47% of American freeloaders is one that has been exciting right-wingers for more than two years and has been notably championed by Fox News. To fill in the background of this story, I am re-posting an article I wrote in August of 2011 that describes the length and breadth of this fictitious political assault on the middle and working class of America. It illustrates explicitly the themes that Romney articulated to his wealthy supporters.

Debt Wish XI: The GOP/Tea Party Plan To Tax The Poor
(August 24, 2011) America’s Republican/Tea Party contingent, who are defined by their dogmatic devotion to lower taxes as a panacea for everything, have finally found a sector of society that they can comfortably saddle with a higher tax burden: The Poor. 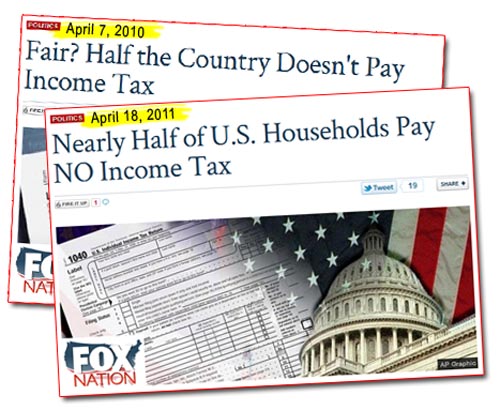 This movement is not some scruffy assemblage of disorganized trust-funders seeking to upgrade their yachts. It is a coordinated campaign that has pulled together high profile proponents from politics and the press. Here is a sampling of the breadth and unity of the movement and the message:

We’re not through yet.

Is there anyone who could seriously argue that this is not a coordinated effort aimed at demonizing low-income and working class citizens? The conformity and ubiquity of the identical messaging from such a broad spectrum of players is audacious and disturbing. And what’s worse, it is deliberately misleading and/or false. 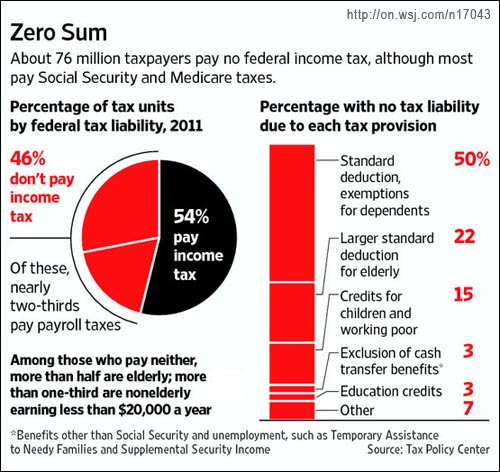 First of all, claims that half the population pay no taxes at all are factually wrong. (See the chart at the left from the Wall Street Journal). There are about 46% who do not pay federal income taxes, but most of them do pay many other taxes including Social Security, state and local, sales, property, gas, etc. Secondly, it should come as no surprise that those with little or no tax liability have little or no income. The majority of this group is comprised of senior citizens, students, the disabled, and the unemployed. Those are the folks that the right wants to tap for new revenue rather than the rich who they have taken to calling “job creators” despite the fact that they haven’t created any jobs since they got the Bush tax cuts a decade ago.

To put this into perspective, federal income taxes account for just 20% of all taxes. When you include all the other sources of tax revenue, people making $20,000 a year pay approximately the same effective tax rate as people making $500,000, give or take 5 percent. However, those earning a half-million have seen their rate decline almost 50% since 1980, while the rate for the 20K earners barely budged.

What’s more, corporate taxes as a percentage of federal revenue dropped from 27.3% in 1955, to 8.9% in 2010. During that same time period individual income/payrolls as a percentage of federal revenue skyrocketed from 58% to 81.5%. Thus the burden of paying for our government shifted broadly from corporations to ordinary people (notwithstanding the Supreme Court ruling that corporations are people). These facts prove that the whole faux controversy over the tax liability of low income Americans is, in technical terms, a crazy zombie lie.

Also worthy of note is that one of the main reasons that many Americans owe no federal income tax is due to the earned-income tax credit that was introduced by Republican President Gerald Ford and expanded by Ronald Reagan and George H.W. Bush. And now the GOP is threatening to impose a tax hike on working people by opposing the extension of President Obama’s Payroll Tax reduction. This relief was passed as a temporary measure and is set to expire at the end of this year. Obama has proposed extending it for another year, but House Republicans are balking, saying that “not all tax relief is created equal” (Rep. Jeb Hensarling, R-TX), and that tax reductions, “no matter how well-intended,” will push the deficit higher (Rep. David Camp, R-MI). Camp is a member of the deficit reduction seeking Super Committee. A spokesman for House Majority Leader Eric Cantor (R-VA), says the legislator “has never believed that this type of temporary tax relief is the best way to grow the economy.”

Really? Is this the same Eric Cantor who fought so fiercely for the temporary tax relief produced by Bush’s tax cuts for the rich? Cantor, and the rest of the Tea-publicans, are putting their deficit cutting necks on the line to raise the 120 billion dollars that would be restored to the treasury by letting the Payroll tax relief expire, but they will take the fight to Hell and back before considering the recovery of 800 billion dollars from the expiration of Bush’s gift to taxpayers earning more $250,000 a year. Apparently Republicans are opposed to temporary tax relief when it benefits the middle and working classes, but they are wildly in favor of it when it benefits the wealthy.

How can the GOP get away with portraying themselves as tax-cutters while advancing an agenda that would increase taxes for most Americans who happen not to be rich? How can the Tea Party assert through their acronym that they have been “Taxed Enough Already” when they view seniors, and other low-income Americans as not taxed enough? And when will the media expose this brazen hypocrisy?

So it’s clear that Romney was not speaking off the cuff in this newly released video. He merely reiterated what has been a mainstay of the conservative agenda for some time. If he tries to explain this away as a mistake or a gaffe, he is going to have to provide explanations for all of the identical statements itemized above. There is nothing out of character in the remarks he gave at his fundraiser. He is, after all, the same guy who said “I’m not concerned about the very poor.” He’s the same guy who said “If you’re looking for free stuff you don’t have to pay for, vote for the other guy.” His denigration of Americans struggling during hard time is entirely on message, just as RNC chairman Reince Preibus said following the release of the video.

The condescending tone of Romney’s comments is what is likely to cause the most damage to his campaign. But let us not forget that the substance of his remarks is consistent with Republican ideology, and it is woven intricately into the fabric of the party’s structure. It reflects the views of their congressmen and senators and state officeholders. And it flows through the airwaves of their PR division, Fox News, and down the media food chain from there.

[Update] Romney may want to do some research into those 47 percenters he is writing off. Of the ten states with the highest percentage of residents who pay no federal income tax, ten are solid red, Republican states.

39 thoughts on “The Roots Of Romney’s Rage: Where His 47% Fiasco Came From”