You would think that it’s bad enough that innocent people at Lone Star College near Houston were assaulted by a maniac with a knife, but the last thing they need is some right-wing jerk-holes exploiting the tragedy to make an idiotic political point about gun control.

Sadly, that’s exactly what happened yesterday as aforementioned jerk-holes like Michelle Malkin, Fox News commentator Todd Starnes, Glenn Beck flunkies, and others made light of the horror experienced by the victims of the attack. The common theme addressed in their juvenile attempts at humor was that Obama would propose some sort of “knife control” now that there had been a mass-stabbing at a school.

Starnes: Does Obama have Air Force One gassed up and ready to head to Houston to launch his “War on X-acto Knives”?

The problem with their non-funny, non-logic (aside from the rank insensitivity) is that there is a glaringly obvious corollary to this story that they are incapable of comprehending. 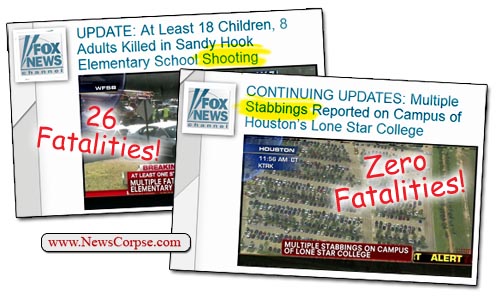 As tragic as it is to be a victim of a crime like this, there is some solace to be had by having survived. That’s a sentiment that is surely shared by friends and relatives. I’m pretty sure that every one of the people who were stabbed are grateful that they were not shot and killed. And the simple fact that there were no fatalities in Houston contrasts vividly with the deadly consequences of last Decembers shootings in Newtown, Connecticut.

If anything, the results of this crime spree are an argument in favor of stricter regulations on guns. NRA apologists are fond of saying that criminals could simply use knives if they were unable to get guns. Well, as we’ve seen here, that would be step in the right direction if your objective is to save lives.

Unfortunately, the objective of the NRA, their bought and paid for legislators, and the dupes they have deceived, is to sell ever more guns and ammo. They work for the firearms manufacturers, not any rank and file constituency of citizens. And they are advocating a policy that guarantees more grief and suffering. It’s time to do something about it and, but for the efforts of the gun worshipers, we could pass sensible legislation that would make our society safer without imposing on anyone’s rights.

By the way, there already is knife control, as well as restrictions on many other dangerous weapons. It’s a pretty sorry situation when the American people overwhelmingly support legal solutions to the problem of gun violence and can’t get it, but silliness like “shoe control.” is imposed in all of our airports. 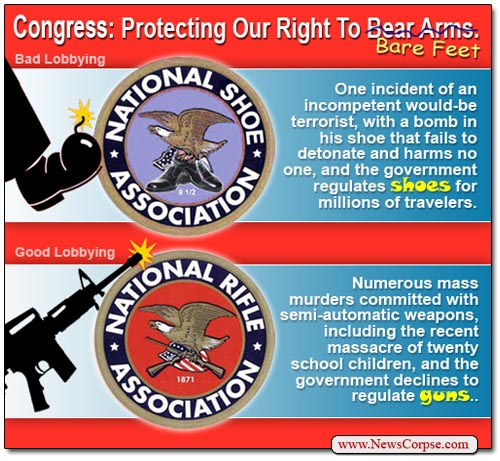