Fox News radio host, John Gibson, embarked on a disturbingly hawkish fit of war mongering that was re-published today on the Fox News community web site, and Festival of Lies, Fox Nation. Gibson displayed his unabashed affinity for mortal combat with a screed that questioned whether an anti-war president should be trusted with war. 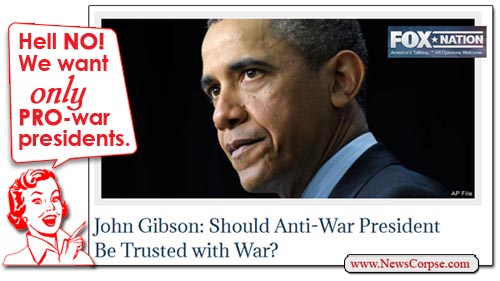 The utter stupidity of that question was the basis for a rant that would only make sense to a confirmed sociopath. Gibson’s self-righteous indignation stemmed from a few sentence fragments that he extracted from President Obama’s press conference on the mess in Syria. Gibson was terribly upset that Obama said that “I was elected to end wars not start them,” and that “I’m not itching for military action,” and that “I’ve spent the last four years trying to reduce our reliance on military action.”

Hellfire and Damnation! It’s an abominable outrage, is what it is. Imagine that, a Commander-in-Chief who expresses a reluctance to unreservedly bomb the crap out of some uppity foreigners. Gibson wonders whether the President’s reluctance will result in a use of force that is hesitant, weak, and confused – which is an outright insult to America’s soldiers. He goes on to say that…

“The President’s resolve to stop the world’s worst actors from using the world’s worst weapons requires that he is willing, even ‘itching’, to act. His stated reluctance to act, his core mission to end wars not start them, stands in the way of taking his resolve seriously.”

Gibson is hankering for a president who is “itching” to start a war. And if that isn’t ludicrous enough, he offers as an example the cowboy antics of a former president, asking whether Obama “has enough George W. Bush in him to decisively use military force.” Apparently Gibson defines decisive as a determination to thrust the country into a decade-long quagmire that produced no benefit and didn’t even bring to justice the terrorist who was supposedly the instigation of it all. Obama, on the other hand, led the nation when Osama Bin Laden was killed, along with dozens of other top Al-Qaeda operatives. It’s pretty safe to say that the ghosts of those terrorist leaders do not doubt Obama’s resolve.

But even setting aside the failures and lies of the Bush administration’s conduct of war, Gibson has presented an utterly falsified version of recent history. Bush’s press secretary, Ari Fleischer, spoke about Bush’s pre-Iraq hesitancy saying “Nobody, but nobody, is more reluctant to go to war than President Bush….He does not want to lead the nation to war.” Bush himself said that “I don’t like war. War is the last choice a president should make, not the first.”

Do these admissions that Bush was not “itching” to go to war mean that his management of the military would be weak and confused, and that he should not be trusted? We will never know Gibson’s opinion of that because he will never address it. Nor will anyone else at Fox News.

However, an accurate historical account would note that, despite Bush’s pronouncements, he was, in fact, quite anxious to attack Iraq, even before 9/11. So the argument could be made that it was his craving for war that was a foretelling of the eventual disaster to which he subjected America and the world. Sincere reluctance would more likely result in a conscientious and well thought out plan.

So Gibson not only gets the history wrong, but his misrepresentation reflects a brutal, gung-ho attitude toward launching a deadly and dangerous conflagration in the notoriously unstable Middle East. Gibson advocates for expanding the mission of any Syrian strike to include eliminating Assad, but he fails to address what would be left after the fall.

This is the sort of hungering for war that characterizes right-wing, neo-cons. Interestingly, many on the right have abandoned their traditional hawkishness because they still hate Obama more than they love killing Muslims. But Fox News has generously provided Gibson this platform to lead a cheering squad for another conflict in the region. It’s a wholly ineffective and illogical effort, but that won’t make any difference to Fox’s audience who aren’t capable of, or interested in, doing the sort of research that proves Gibson is an idiot.

2 thoughts on “Fox News Bloodlust: Crusading For A Pro-War President”