The determination of Fox News to criticize President Obama over anything that he says or does is well established. They have a knee-jerk negative response to his every utterance, even if he is agreeing with them. But apparently that isn’t even an aggressive enough expression of disgust. So now they are inventing quotations that never occurred and assigning them to the President. 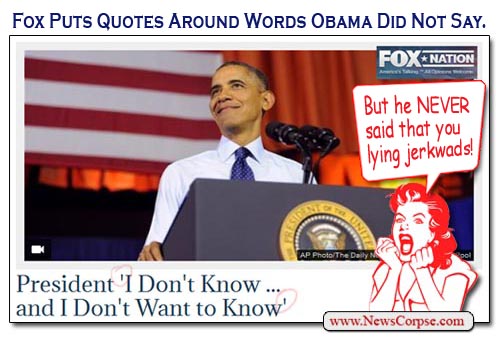 In an item posted to Fox’s community website, the Lie-Riddled Fox Nation, the headline reads “President: ‘I Don’t Know … and I Don’t Want to Know'” If the editors were referring to their own interest in what truthfully took place, that would would be an accurate headline. They clearly don’t know and don’t want to know the truth. However, they are allegedly quoting President Obama who never made those remarks.

The support cited by Fox were three items that took Obama to task for not knowing about the NSA’s alleged spying on a variety of world leaders. The first was an op-ed in the Wall Street Journal written by Reagan speechwriter Peggy Noonan. The second was a Bill O’Reilly rant on his Fox program. The third was a segment from The Daily Show with Jon Stewart. In none of these citations did Obama say the words that the Fox Nationalists attributed to him. They had three shots at the brass ring and missed all three times.

It is ironic, though, that Fox chose to include Noonan’s article to ding Obama on what he knew about some clandestine national security matters. Noonan’s former boss, you’ll recall, was summoned to Congress to give an accounting of his knowledge of the Iran-Contra Affair wherein he sold weapons to the Iranians in order to earn money with which to support fascist rebels in Nicaragua. He answered “I don’t remember” or “I don’t recall” 124 times. This far exceeds any allegation by Republicans today as to Obama’s mindfulness.

I guess Noonan, and Fox, can’t be expected to remember those serious felonies when they are so preoccupied with slandering Obama, who broke no laws. In fact, the sort of spying in question is presumed, by most intelligence professionals, to be occurring routinely every day by every major country. The only thing that is extraordinary about it is that it became public. And that’s all Fox needed to assemble their best storytellers and make up some things to pretend that Obama said.

6 thoughts on “Fox Nation vs. Reality: Putting Words In The President’s Mouth”