In a development that will surprise only a few mentally deficient cave dwellers, President Obama’s State of the Union speech was greeted by Republican politicians and conservative pundits with barefaced disdain. Naturally, Fox News took the lead in developing a hostile rapid response in order to provide the President’s foes with an easily referenced collection of attack themes. In fact, Fox was so diligent that their oppositional strategy was actually launched before the speech even began.

To set the scene, Obama presented a rosy picture of the nation after six years of his presidency. He spoke of the economic renewal that has created more than 11 million new jobs, reduced the deficit by two-thirds, and produced unprecedented private sector growth. He addressed many of the issues that have long been a part of the Democratic agenda including tax reform that eliminates loopholes for the rich and benefits the middle-class, enhancing opportunities for education, reducing our dependency on foreign oil and advancing the development and use of alternative fuels, Climate Change, equal pay for women, raising the minimum wage, Net Neutrality, and access to affordable and effective health care. And he noted that the successes of the last six years were achieved despite the fact that “At every step, we were told our goals were misguided or too ambitious; that we would crush jobs and explode deficits.”

So how did the right respond to these facts? By denying them, of course. And they topped that off with some distractions and ad hominem insults. The apparent primary line of attack from the right is to accuse Obama of not having heard the message sent by voters last November. However, if there was any message at all it was delivered so faintly that the President could be excused for not hearing it. It was the lowest voter turnout in 70 years. Sixty-two percent of Americans didn’t vote at all, and the Republican victories were achieved with about 20% of eligible voters. That’s not exactly a mandate.

The GOP complained that the American people want him to work with Congress. But their definition of that is to abandon his principles and capitulate to Republicans. Obama tried to work with the GOP for six years and was rebuffed at every turn. It’s ironic that Republicans demand that Obama pay heed to the election results when they so flagrantly ignored them in 2008 and 2012, even plotting to oppose everything he did from day one of his administration. Where were the Republicans insisting on respect for the decision of the voters when Mitch McConnell declared, on inauguration day, that his first priority was making Obama a one term president? And it should be noted that Obama enjoyed landslide victories with much larger voter participation.

It didn’t take long for one of the points Obama made in his speech to get rolled over by the Fox News editorial positioning. The President sought to inspire a more substantive relationship between the White House and Congress saying…

“There are a lot of good people here, on both sides of the aisle. And many of you have told me that this isn’t what you signed up for?-?arguing past each other on cable shows, the constant fundraising, always looking over your shoulder at how the base will react to every decision. […] A better politics is one where we debate without demonizing each other; where we talk issues, and values, and principles, and facts, rather than ‘gotcha’ moments, or trivial gaffes, or fake controversies that have nothing to do with people’s daily lives.”

The Fox News collective, and the Republican Party they serve (or is it the other way around) suffers from Oppositional Defiant Disorder: a persistent pattern of tantrums, arguing, and angry or disruptive behavior, generally associated with children. A perfect illustration of this is the way the Fox Nation website characterized a post-SOTU article by the Associated Press. Their headline was “AP Fact Check Obliterates Obama’s SOTU.” 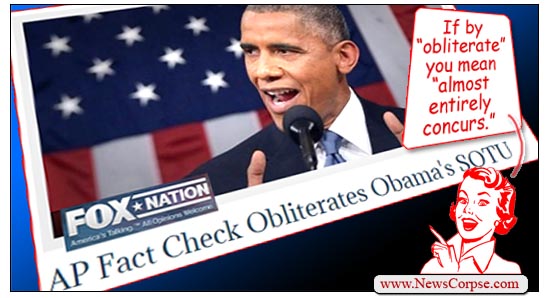 To be sure, the AP took a decidedly biased and negative tone, as the so-called liberal media usually does, but even so, they could not find substantive fault with Obama’s speech, much less obliteration. Here are the “facts” they allegedly checked:

It appears that Fox News is confusing the concept of “obliteration” with the diametrically opposed concept of “nearly complete concurrence.” That degree of cognitive failure explains the antsy grumbling of FoxPods and the GOP who are distressed that Obama has not concluded that the last two years of his presidency are irrelevant and that he should work on his presidential library and let Republicans in Congress govern the country. And it also explains how they can insist that his speech was defiant and combative despite these closing remarks:

“If you share the broad vision I outlined tonight, join me in the work at hand. If you disagree with parts of it, I hope you’ll at least work with me where you do agree. And I commit to every Republican here tonight that I will not only seek out your ideas, I will seek to work with you to make this country stronger.”

It would be naive not to recognize that this sort of rhetorical communion is common in political discourse and is often insincere. But it was nevertheless an outstretched hand and the GOP ought to at least try to grasp it before they swat it down. But that would be totally out of character for a party that has made rancid animosity the hallmark of their tenure.

8 thoughts on “KNEE-JERKS: The Predictable Ass-Holiness Of Fox News And The GOP Post-SOTU”