The long awaited battle between Hillary Clinton and the Republican’s Committee to Politicize Benghazi is now in the history books. It was a marathon eleven hour affair that featured the top names in partisan propaganda as they tried in vain to wear down Clinton and force an error. 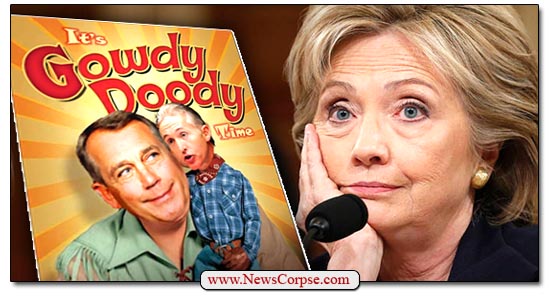 The details are hardly relevant because even the committee’s chairman, Trey Gowdy, admitted that nothing new was learned from the inquisition. When asked by reporters what the hearing had achieved, he said that “In terms of her testimony? I don’t know that she testified that much differently today than she has the previous times she testified.”

In other words, this committee has been just as incapable of manufacturing a scandal as the seven other committees before it. And even though Gowdy, in his opening statement, vilified his fellow Republicans on prior committees by repeatedly maligning their efforts as not being “serious and thorough,” he was unable to achieve anything more than they did, by his own admission.

Meanwhile, Clinton held up impressively well for the entire hearing, even though she was the only person involved who had to be aware and engaged throughout. The committee members all got to rest between each of their five minute question periods, but Clinton had no such relief. Kinda puts into perspective Donald Trump’s wimpy whining about standing for a three hour debate where he would only be required to speak for about fifteen minutes.

But the real indication that this hearing was a total bust for the Republican scandal machine was that Fox News cut out long before it was over. Both CNN and MSNBC covered the eleven hour hearing wall-to-wall, but Fox News bailed after only seven hours, when they flipped back to their regularly scheduled programming (The Five). So they left out fully one-third of the proceedings. Do you think they would have done that if they thought that Clinton was bombing? Of course not. They were more worried that she looked strong, confident, knowledgeable, and (gasp) presidential. That was something they didn’t want their viewers exposed to, so the decision was made to ditch the live hearings and return to their panel of wingnut pundits on whom they could rely for continued Clinton bashing.

To underscore the significance of this editorial cowardice, we must remember that Fox News has always been the network most obsessed with Benghazi. They even celebrated their own reporting, and particularly their CEO Roger Ailes, for being the “driving force” pushing to “keep Benghazi alive.” After devoting that much effort to turn a tragedy into political theater, Fox wouldn’t even stick with the live broadcast of the headlining act.

What viewers who watched the whole session would come away with is that GOP inquisitors were mainly concerned with emails from Clinton friend Sidney Blumenthal (whose transcripts the GOP committee members voted not to release), and the administration’s references to an anti-Muslim video following the attacks in Benghazi. Both of those were purely political subjects and neither could possibly shed any light on how the attacks occurred or what could be done to prevent similar attacks in the future.

So Gowdy and his cohorts can cite at least one thing that this hearing succeeded in achieving: That Republican House Majority Leader Kevin McCarthy was correct when he said that the committee’s purpose was to bring down Hillary Clinton. And they even failed on that score. Congratulations.