The rapidly wilting tundra weed we know as Sarah Palin came out of her ice cave today to remind us all of why we have forgotten her. But she wasn’t stepping forward to condemn the horrific murders by a Christian terrorist at a Colorado Springs Planned Parenthood facility. Like many of her political persuasion, she is ignoring that it even happened. Instead, she took to Facebook to attack President Obama’s execution of the war against ISIS. She begins her tirade saying that…

“We desperately need a Commander-in-Chief for such a time as this, not a divisive ‘Community Organizer’ with a blowhorn, stirring domestic aggravation. Americans should be able to live with no fear of any outmanned, outsmarted, outgunned punkass-evil, misogynist, homophobic, intolerant death cult trying to infiltrate innocent populations.”

Forgive us if we’re not quite certain to whom she is referring. The first group that comes to mind when described as an “outgunned punkass-evil, misogynist, homophobic, intolerant death cult,” is the Republican Party. Chances are that is not what Palin had in mind. But the GOP is a party that worships the NRA, is fiercely opposed to women’s issues, regards gay rights as blasphemy, and relentlessly lobbies for unending war. So Palin should have been more specific if she wanted people to reach a different conclusion. And speaking of “a blowhorn, stirring domestic aggravation,” has she looked in a mirror lately? 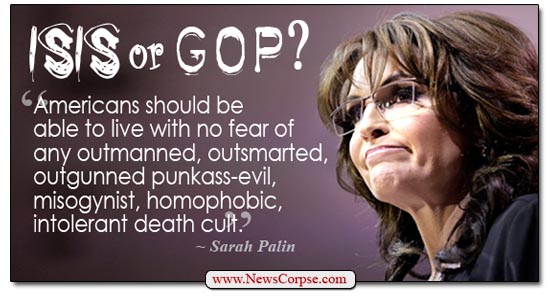 In her Facebook rant, Palin asserts that the only thing necessary to defeat ISIS is the “the political will from on high with the command to ‘fire!'” She is apparently ignorant of the fact that under Obama’s direction the command to “fire” has been issued over 8,000 times. That’s how many U.S. bombing missions have been conducted against ISIS in the past couple of years. As a result, many of their leaders have been killed and their hold on territory has receded. In addition, other nations such as England, Germany, France, Jordan, Saudia Arabia, even Iran, have been battling ISIS. So Palin’s attempt to minimize the difficulty of the task is plainly ill-informed. Furthermore, the successes achieved thus far are not diminshed by the fact that small cells of ISIS sympathizers have carried out random acts of terrorism. That’s one of the harsh realities of modern warfare.

Palin went on to say that “Muslim extremists crave an oncoming clash of civilizations.” That’s true. And it’s one of the arguments for refusing to surrender the high ground to them on that matter by referring to them as “Islamic” terrorists. ISIS is desperate to be viewed as the legitimate voice of Islam. However, most Muslims reject that claim and oppose the designation. In fact, the only parties insisting that ISIS be called “Islamic” terrorists are ISIS, Republicans, and Fox News.

Finally, Palin takes a dig at Seth Meyers, who interviewed her last week (video below). During the segment he effectively shamed her for being so insensitive to the plight of the Syrian refugees who are seeking asylum in the U.S. and elsewhere. She charged that he needs to “recover” from his “gullibility.” But it was Palin who demonstrated that she is incapable of coherent analysis and didn’t even know the process in place for vetting refugees before admitting them. Now she is demeaning Meyers and anyone else for “believing the Feds have an 18-24 month bureaucratic vetting process that successfully filters out the bad guys.” Of course, there have been nearly 785,000 refugees admitted into the U.S. since 2001 and not a single American has been harmed because of it.

Since Palin was so inept at responding to Meyers’ questions on the show, she is now resorting to a second try via an editorial on the widely disrespected, wingnut and birther website, Breitbart News. But she still fails to make any sense and her reputation as a blithering idiot is only enhanced. She should have quit while she was a[air]head.

6 thoughts on “ISIS Or GOP? Sarah Palin’s Description Of Terrorists Fits Both”