In an epic demonstration of “Hispandering,” Donald Trump tweeted a photo of himself pretending to have a taco bowl salad in his office at Trump Tower. The Tweet said “Happy #CincoDeMayo! The best taco bowls are made in Trump Tower Grill. I love Hispanics!” There is so much wrong with this pathetic gesture that it’s hard to know where to begin. 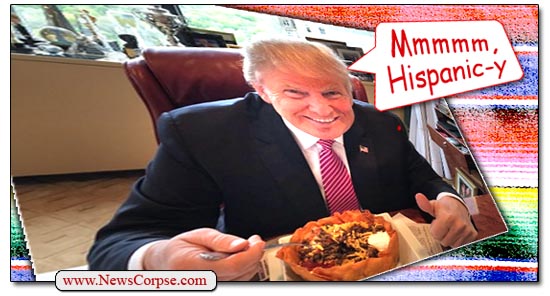 How about we start with the fact that the photo of Trump allegedly having a Mexican lunch in his New York office is a lie. He is campaigning in West Virginia today, so that photo was taken at some other undisclosed time. Furthermore, his boasting about the “best taco bowls” being made at the Trump Tower Grill is also a lie. A quick glance at the Grill’s menu shows that it does not serve them. What’s more, taco bowls are not a Mexican dish, they are an American variation. And finally, Cinco De Mayo is not an Hispanic holiday, it is Mexican, but actually celebrated more in the U.S.

If all of that weren’t a bad enough insult to the people that Trump has been insulting for months, Trump tacked on a thoroughly disingenuous expression of love based on his fake dietary habits. And if the flagrant racism in it doesn’t stand out, just imagine if it were a different holiday and Trump tweeted “Happy #MLKBirthday! The best fried chicken is made in Trump Tower Grill. I love blacks!” Would that be racist enough?

For Trump to repeatedly profess his affection for people he is promising to deport in massive numbers is nauseatingly dishonest. And yet, the bigots who support his candidacy are too stupid to realize that he can never deliver on his promise to deport eleven million people. The logistics involved to identify them and take them into custody are impossible to carry out. Then the task of transporting them to – well, wherever they are from, because it isn’t just Mexico – is similarly impossible. In fact, if the government filled 100 buses with 100 immigrants in each bus, and ran them seven days a week, 365 days a year, it would take three years to remove all eleven million immigrants, and that’s assuming they were all located and willing.

But that isn’t the whole picture for Trump’s ridiculous immigration policy. After taking criticism for the horrific insensitivity of his plan that would banish long-time residents to nations they never knew as home, and callously rip families apart, Trump attempted to soften the blow by insisting that everyone would be able to come back via a legal process. Assuming that his government were able to hold hearings for 1,000 people a day, seven days a week, 365 days a year (which would be absurd considering the current court backlogs), it would still take thirty years to complete the processing of just those who were deported and not any other new immigrants from any place else in the world.

So it is simply preposterous to propose what Trump is proposing. It’s a promise that he can never fulfill. But even that doesn’t take into consideration the harm that such a plan would do the nation’s economy. Just this week the American Action Forum, a notoriously conservative think tank, released a study showing that…

“Donald Trump’s vow to round up and deport all of America’s undocumented immigrants if he is elected president could shrink the economy by around 2 percent.” [and that] “Removing them would cause a slump of $381.5 billion to $623.2 billion in private sector output.” [and additionally] “The study did not factor in potential impacts of mass deportations on consumption, investment and other economic factors.”

But never mind all of that. Those are just facts, and Republicans, particularly those who support Trump, have long ago abandoned any interest in them. After all, Donald Trump likes taco bowls and loves Hispanics. He loves them so much that he will even pretend to eat fake Mexican food in his office on a holiday that he couldn’t explain the meaning of. And this is how the Republican Party hopes to win the support Hispanics and other minorities who have rejected the GOP in droves for the past few election cycles.