Is Donald Trump a billionaire or a world-class grifter?

It has been difficult to pin down Trump’s net worth because he refuses to release his taxes until an alleged audit is complete. That excuse has been ridiculed by experts and even the IRS says there is nothing preventing him from making his own tax information public. Nevertheless, he is continuing to hide behind his lawyers and now says that his returns might not be released until after the election. 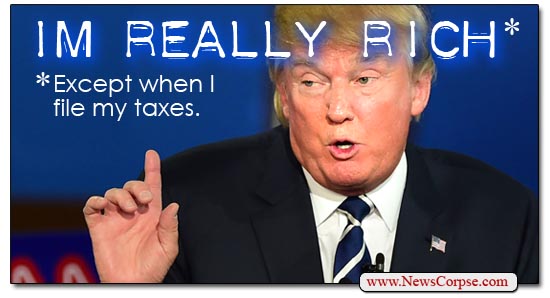 Tax returns have been a staple disclosure in politics for nearly half a century. Hillary Clinton has made more than thirty years of returns available to the public. But Trump told ABC’s George Stephanopoulos this weekend that his tax rate is “none of your business.” However, there is data available through other tax filings that is shedding some light on Trump’s mysterious empire.

ABC News is reporting (video below) that the Trump National Golf Club in Westchester County, New York, was valued on Trump’s candidate disclosure statement at “more than $50 million.” The high valuation serves Trump’s political purposes to portray himself as a successful businessman. But when he declared the assessment of the resort for tax purposes he claimed that it was worth only $1.75 million. The difference between his tax declaration and his candidate disclosure amounts to a savings of 90% on his tax bill.

When asked by ABC’s Brian Ross to comment on the discrepancy, he was told that the matter was “decades old and not worthy of a response.” He said much the same thing to reporters asking about the recent discovery of an audio tape of him posing as his own fictional press agent when talking to the media. This is a statute of limitations that only applies to Trump, whose obsession with the Clintons’ marital difficulties from the 1990s he still considers fair game.

The ABC story cited several other instances when Trump was less than honest about paying his taxes. One particularly egregious incident was when he purchased the yacht that became his beloved “Trump Princess.” At the time he pretended to have a patriotic incentive for buying the luxury liner. He said:

“I like to see the great jewels of the country being owned by the people of this country. And it had a big play as to why I bought this boat.”

However, as Ross reported, Trump “used off-shore and out-of-state corporations to buy the yacht and saved him a tax bill of some $1.75 million.” What a patriot. Something that Ross left out is that later, when Trump was undergoing a severe financial crisis, he sold the yacht to Saudi Arabia’s Prince Alwaleed Bin Talal. So much for “the great jewels of the country.”

The Trump National property was purchased in foreclosure for $8 million, and he spent another $45 million developing the golf course and the club house. So either this property suffered a massive decline in value and Trump isn’t worth what he says he is, or he is deliberately undervaluing it to avoid his legal tax bill. Either way, one of his public declarations is a flagrant lie. And with this report by ABC News will the media pick up the story and begin to tell the truth about Trump’s dishonesty?

3 thoughts on “Tax-Dodger Donald: Trump’s Own Documents Prove He Lied About The Value Of His Properties”