Advancing the already stridently fascist policy platform of Donald Trump’s candidacy, one of his closest friends and political allies is now recommending that Trump put his boot down on the free press should he become president. 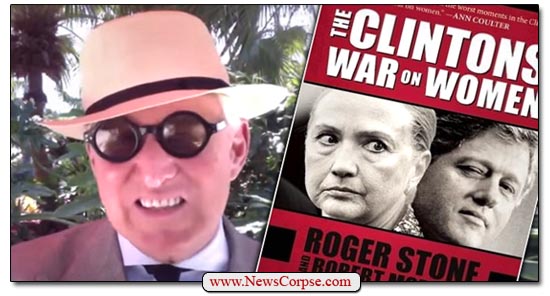 Notorious dirty trickster, Roger Stone, has made a name for himself pushing ludicrous conspiracy theories and offensive smear campaigns. He is a veteran Clinton-hater who once started a group he called “Citizens United Not Timid,” or C.U.N.T. On the basis of that he later became a Fox News Contributor. (Media Matters has compiled a useful guide to his antics).

Yesterday, in an interview with Brietbart News, Stone floated more of his trademark trash in the form of advice for his buddy Donald Trump. In the midst of a tirade against CNN, which he said “is not a news organization, but an advocacy group,” he complained that at CNN “they turn you off” if you try to talk about the women in Bill Clinton’s past. But he has a solution to that problem:

“Frankly, when Donald Trump is president he should turn off their FCC license. They’re not a news organization. They’re about censorship.”

There is so much wrong with that statement that it’s hard to know where to begin. Let’s start with the fact that he could have been talking about Fox News and it would have been more accurate. But the larger issue is that advocating that the government take a roll in deciding which news enterprises should be permitted to operate is not only a violation of the Constitution, but an overtly oppressive tactic generally favored by tyrants. On that measure, it’s easy to see why Trump might be on board.

Trump has previously espoused similar nonsense. In February he threatened the New York Times, and other media outlets he assumes are biased against him, with lawsuits and the prospect of “open[ing] up our libel laws so when they write purposely negative and horrible and false articles, we can sue them and win lots of money.” And notwithstanding the fact that he can do that now if he actually had a case, he warned that these publishers would “have problems” if he is elected.

Another problem with Stone’s suggestion to de-license CNN is more pragmatic: It’s impossible. The FCC’s authority to regulate licensing is restricted to broadcast media (radio and TV) and they cannot revoke a cable news channel’s license because they don’t issue them. Broadcasters operate over the public airwaves, while cable channels are transmitted on privately owned cable facilities. So Stone’s counsel is not only unconstitutional, it demonstrates his utter ignorance of the subject matter.

Stone has a history of flagrantly offensive remarks that have insulted women and African-Americans. His racist and misogynist tendencies are often expressed openly. As a result he has been banned from both CNN and MSNBC. At Fox News they canceled a few of his recent appearances but have not formally banned him and he has not appeared in several weeks. That may be why he is resorting to fringe platforms like Breitbart to put out his repugnant message. Breitbart has all but officially endorsed Trump and there are credible allegations that Trump paid Breitbart for favorable treatment.

In closing the interview, Stone got to the point of his remarks with a shamelessly self-serving plug. He recommended that listeners get the “truth” by reading the book “The Clintons’ War On Women,” by Roger Stone. It’s a book that has been roundly rebuked by liberals and conservatives alike as being poorly written and sourced. But one thing it has going for it is that Donald Trump has made it his anti-Clinton bible. The diatribes Trump is currently spewing about Clinton’s past are all straight out of this book.