This week saw Hillary Clinton become the presumptive nominee of the Democratic Party for president of the United States, an historic achievement as the first woman to do so. She also got the endorsement of President Obama and other party leaders. These events affirm that the 2016 general election has officially commenced. And with that. Fox News is rolling out its quadrennial blitzkrieg of smears and lies aimed at all things Democrat, and specifically Hillary Clinton.

Yesterday on Fox & Friends, the Curvy Couch Potatoes latched onto an interview Clinton gave to Scott Pelley of CBS New wherein she was asked the sort of tough question that Fox insists the lamestream media never ask her:

“It’s possible that your biggest obstacle is not your opponent but yourself. Fifty-two percent of the American people who participated in our CBS news poll have an unfavorable opinion of you. That is the highest negative impression of anyone ever nominated by the Democratic party since we started asking that question in 1984. Do you bear any responsibility for that?”

The Fox Newsers then spent several minutes lambasting Clinton for her answer which they portrayed as refusing to accept any responsibility. To them it was further proof of her arrogance and dishonesty. The only problem with that is the substance of her actual answer (video). 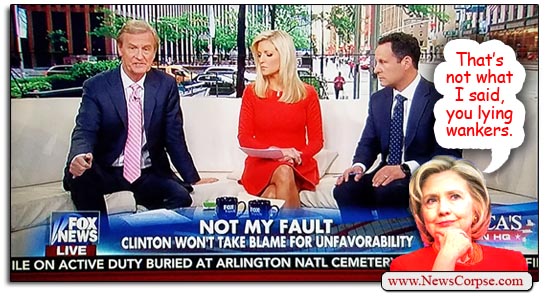 “Oh, I’m sure I do, but I think when I was secretary of state and serving our country, I had an approval rating of 66 percent, and I think it’s fair to ask, ‘Well, what’s happened?’ And what’s happened is tens of millions of dollars of negative advertising and coverage that has been sent my way.”

So right up front Clinton explicitly acknowledged that she bore responsibility for the public’s perception of her. The fact that she went on to cite other contributing factors doesn’t diminish what she said. And the ability of the media to influence public opinion is something that conservatives are usually the first to complain about. However, that criticism of the press is apparently off-limits to Clinton. The same subject, with the same dishonest spin, was also discussed later on Fox’s Outnumbered.

Today, another Fox News distortion of reality was broadcast following a White House press briefing. Fox News told their gullible viewers that Press Secretary Josh Earnest had confirmed that the FBI probe into Clinton’s email is a “criminal” investigation. 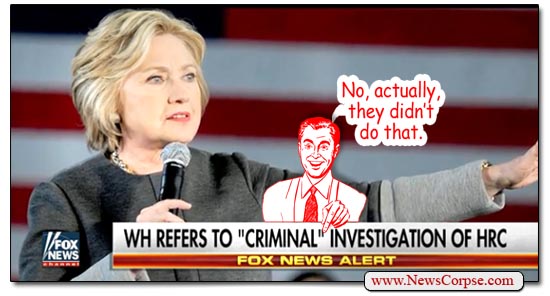 Once again, there is a small problem with that characterization: It isn’t remotely true. Fox was referring to this exchange between Earnest and Fox’s correspondent, James Rosen:

Rosen: So when a career prosecutor or an FBI agent who’s working on the Clinton investigation hears this President speak openly of how he wants Hillary Clinton to succeed him, you don’t think that that career prosecutor or that FBI agent takes that as some indication of how the President wants to see this case resolved?
Earnest: No. I think that those career prosecutors understand that they have a job to do, and that that job that they’re supposed to — which is to follow the facts, to pursue the evidence to a logical conclusion — that that is a job that they are responsible for doing without any sort of political interference. And the President expects them to do that job. […] That’s why the president, when discussing this issue in each stage, has reiterated his commitment to this principle: that any criminal investigation should be conducted independent of any sort of political interference.

Clearly Earnest was not referring to the Clinton case in that response. He was articulating a general principle of judicial propriety that is practiced by any White House. Had he been referring to the Clinton case he would have said “this criminal investigation,” rather than “any criminal investigation.” His statement was meant to be taken more broadly as a principle, just as he described it.

What’s more, Rosen’s question was downright stupid. The notion that a president expressing support for another candidate from the same party is not exactly a revelation. If investigators were susceptible to such pressure, they wouldn’t need Obama to announce his support in order to know that he backs Clinton. That should be obvious to anyone who isn’t desperately trying to construct a dishonest narrative. So it can be assumed that the investigators were already aware of Obama’s position with regard to Clinton. If Rosen had evidence that they had any bias toward Clinton, he would have presented it. Instead, he just floated some wild conspiracy theories. And even after that, Fox still felt they needed to lie about the answer given by Earnest.

Expect much more of this to come as the campaign proceeds toward November. Fox knows that all they have is lies and they will pour them out by the buckets full for the next four months. This says something about the dearth of negative information held by Fox. If they had anything truthful with which to skewer Clinton, they wouldn’t have to lie so badly or so frequently.

2 thoughts on “Fox News Is Ramping Up Their Flagrant, Dishonest Smearing Of Hillary Clinton”