Now that Donald Trump has officially become the nominee of the Republican Party for president, the election season can shift some focus to down ballot races for governors and Congress. One such race is the senate seat being vacated by prostitute patron David Vitter in Louisiana. Among the throng of hopefuls for the seat we can now add former Klan leader David Duke. 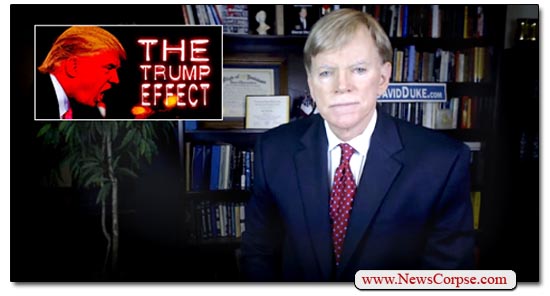 What makes Duke’s candidacy notable is the inspiration he cites for throwing his white, pointy hat in the ring. In a video launching his campaign (below), Duke says “I’m overjoyed to see Donald Trump and most Americans embrace most of the issues that I’ve championed for years. My slogan remains ‘America First.’” His argument for electing him is that he would be the one person in Congress looking out for white, Christian Europeans. Well, except for the other 80% of the members of Congress.

The Louisiana Republican party said that Duke is “a hate-filled fraud who does not embody the values of the GOP.” However, there is no disputing that Duke is running on Trump’s coattails with a nearly identical platform. He has endorsed Trump for president and was impressed with his acceptance speech tweeting “Great Trump Speech, America First! Stop Wars! Defeat the Corrupt elites! Protect our Borders!, Fair Trade! Couldn’t have said it better!” That’s high praise. Trump must be proud that he is so perfectly articulating the hopes and dreams of one America’s leading white supremacists.

In addition to being inspired by Trump, Duke takes some credit for inspiring Trump’s ascendancy in the Republican Party. Earlier this month when he first floated his interest in running for office, Duke bragged that “I’ve said everything that Donald Trump is saying and more. I think Trump is riding a wave of anti-establishment feeling that I’ve been nurturing for 25 years.”

He may have a point. Trump is rather new to the bigots banquet, at least so far as assuming a public role in the movement is concerned. But he has risen rapidly and succeeded in corralling a broad measure of support from the racist rank and file. Last year Politico reported that:

Indeed, Trump is making it easier for avowed racists to come out of the closet and profess their bigotry with pride. Let’s call it “The Trump Effect.” It begins with his willingness to retweet racist memes and comments from blatant white supremacists. And he scores more points for failing to disassociate himself from racist supporters, or for only doing so after being criticized. And even then without much conviction.

Trump, of course, denies that he is racist. But if you are being heralded by racists and neo-Nazis, at some point a conscientious person would want to know what it is they are doing that is attracting such a repulsive contingent of cretins. Trump’s supporters and the Republican Party ought to be asking themselves the same questions.

Having conquered the Republican primary, Trump has thrown the door wide open for racists who used to be reticent about going public to actually seek public office. They now have carte blanche to advertise their biases with some confidence that they can attract votes, at least within the GOP. That’s the distasteful opportunity that the Trump Effect has created for David Duke and others like him.

UPDATE: Trump just announced that he might vote for Duke:

“Mr Trump was asked if he would support a Democrat over Mr Duke if it was necessary to defeat him, Mr Trump replied: “I guess, depending on who the Democrat is.”