Donald Trump’s campaign is scrambling to regain its footing following a precipitous plunge that accelerated after a disastrous convention. However, his latest moves have only made things worse. Few observers have found much merit to putting racist and misogynist media moguls at the helm of his nationalistic crusade. Even his own surrogates are struggling to remain positive, more often devolving into the delusional (#Says who?). 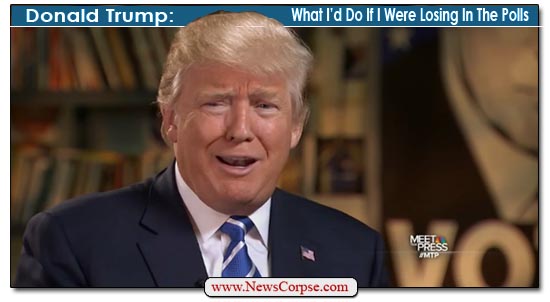 Trump’s cartoonish self-confidence early in the campaign manifested in prideful comments like “If I don’t win I’ll consider this a total and complete waste of time.” And who can forget when he bragged that “We’re going to win so much, you’re going to be so sick and tired of winning.” Apparently Trump has reached that apex of winning. Having become sick and tired of it, as he predicted, he has abandoned it in favor of losing more pitifully than any presidential candidate before him. He’s bound and determined to be the best loser with the hugest, most tremendous losses ever. Losing “big league,” you might say.

Which brings back memories of an appearance last October on Meet the Press where Trump had this exchange with host Chuck Todd (video below):

Todd: You said something the other day that caught me off-guard. You said you’re not a masochist, and if you start falling in the polls you’ll go back to your business. What does that mean? Are you not in this for the long haul?

Trump: A lotta people have asked me that question. Number one, I’m not a masochist. And if I was dropping in the polls where I saw that I wasn’t gonna win, why would I continue? And it’s funny. Maybe it’s, like, not like me because it’s the power of positive thinking. I’m a very positive person, I’m a positive thinker. But the truth is, I’m a realist.

I believe in polls. How many elections do you see where the polls were wrong? Not that many. Okay. You see ’em, but not that many. If I were doing poorly, if I saw myself going down, if you would stop calling me ’cause you no longer have any interest in Trump because “he has no chance,” I’d go back to my business. I have no problem with that.

First of all, Trump was being uncharacteristically truthful when he said he’s not a masochist. He is, of course, a narcissist. More to the point, his contention that he would quit the race if he were “dropping in the polls” should be revisited. As of today Trump has trailed in 23 of the last 23 national polls taken. The margin of Hillary Clinton’s lead is as high fifteen points. The poll-of-polls average is about six points. Furthermore, Trump is behind in ALL of the critical battleground states. No candidate this far down has ever come back to win in November. And he can hardly whine about the polls being rigged after giving such a hearty endorsement to them (well, he can but…).

Trump, the realist, ought to live up to his promise. Rearranging the TrumpTanic’s deck chairs is not going to enhance his chances of victory. Particularly when his new campaign staff is comprised of the Internet’s fringe elite. Last month Trump tantalized his disciples with the prospect of launching his own cable network, an epically horrible idea as detailed here. But if he’s still interested, this might be a good time to ditch his futile presidential ambitions and concentrate on the premiere of the Trump Propaganda and Home Shopping Network. He can take his current campaign staff (including disgraced ex-Fox News CEO Roger Ailes and loony ultra-rightist Breitbart News chairman Stephen Bannon) with him, because they would be better suited to a media propaganda venture than they are to politics. And he would have the gratitude of a nation that would be able to turn on their TVs without seeing him throwing tantrums and denigrating America. Win/Win.

2 thoughts on “Q: Is Donald Trump ‘Sick And Tired Of Winning’ Yet? A: See Video”