There are very few opportunities to watch a presidential campaign implode in full view of the public. However, that’s what is happening right now to Republican nominee Donald Trump’s crusade of vitriol and petulance. In the past few days his campaign morphed into a white nationalist movement lead by a radical ultra-rightist. 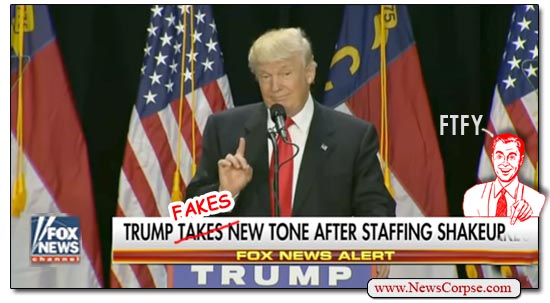 Breitbart News Chairman Stephen Bannon has taken the reins of the campaign (for now) as Trump’s polls sink to historic lows. Bannon’s contribution is expected to be an embrace of Trump’s worst traits and most extreme positions. Which is good news for Hillary Clinton because no one benefits more from the “let-Trump-be-Trump” strategy than Democrats.

Confirming the impending meltdown of TeamTrump, the former spokesman for Brietbart News, Kurt Bardella, has been making the media rounds to supply some insight into Trump’s suicide squad. He appeared on Fox News Friday asked by host Heather Nauert if they are “now on track with their campaign?” Bardella’s response was that:

“I think at the end of the day one speech on message doesn’t make an entire campaign, and certainly doesn’t erase an entire year’s worth body of work.”

Perhaps that’s a bit too complex for a press corps that seems to think a candidate-hyped pivot represents real change. They have spent the last 48 hours swooning over Trump’s wishy-washy regrets that were written by hired hacks. Bardella went on to discuss how Trump’s “regrets” were quickly shoved out of the media spotlight by his clumsy announcement that his skeevy campaign manager Paul Manafort had resigned:

“That’s just another example of the Trump team not really having their act together. […] They stepped on their own news cycle needlessly.”

More importantly, Bardella provided his unique insights into Bannon garnered from their two year working relationship at Breitbart News. As spokesman for the website he had unparalleled exposure to its inner workings. He resigned following the infamous episode when Trump’s then-campaign manager, Corey Lewandowski, manhandled Breitbart reporter Michelle Fields. Bannon’s failure to support his own reporter against an abusive jerk repulsed Bardella and other Breitbrats who also bailed out. He held nothing back when the subject came up on Fox:

Nauert: What can you tell us in a fair fashion about what it was like working for [Bannon] and what we can expect from his leadership of the Trump campaign?

Bardella: Steve is someone who governs very much by fear. He’s a bit of a dictator of a character. He’s known for making latenight, profanity-laced tirade phone calls at his staff when things aren’t going the way he wants them to go.

Sounds like a perfect match for Donald Trump. The picture Bardella paints of Bannon as an authoritarian bully may jibe with Trump’s personality, but it can’t possibly help him to broaden support among voters. Trump already has the white supremacist and neo-fascist vote locked up. In fact, rational Republicans are more likely to be alienated by Bannon’s ideas and methods. Including Bardella who just wrote an op-ed for The Hill where he announced that he will be voting for Hillary Clinton:

“What eventually caused me to terminate my relationship with Breitbart was Steve’s guidance of Breitbart to become the de facto propaganda machine for Donald Trump. […] It is glaringly obvious that Donald Trump does not have the temperament or the judgment to occupy the Oval Office. This is one of those times where the best interests of the whole outweigh any partisan allegiances or any specific issue. It’s why I’ve made the personal choice to vote for Hillary Clinton in November. Donald Trump is dangerous for America.”

When you’ve lost the spokesman for Breitbart News, who served in the same role for wingnut Republican Darrell Issa, it may be time for an intervention. There’s a reason that former KKK Grand Wizard David Duke and other racial hate group leaders have endorsed Trump. Maybe the rest of his supporters would like to reconsider the measure of the man they are backing for president. Or more sickening, maybe they have and they’re cool with it.