With the election rapidly approaching (just six more weeks?!), the traditional spate of endorsements is heating up. There has already been one surprise as deep in the heart of Texas, the Dallas Morning News endorsed Hillary Clinton. Backing their first Democrat in 75 years, they said that “there is only one serious candidate on the presidential ballot.” 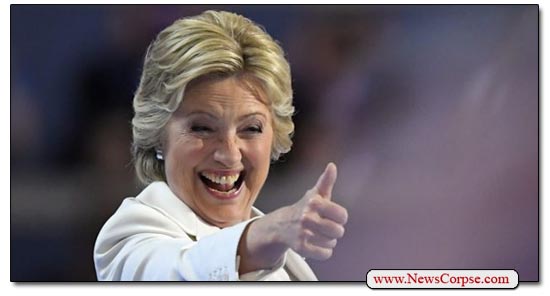 Now the New York Times has revealed their choice for president in a stirring and detailed announcement that begins with this:

“In any normal election year, we’d compare the two presidential candidates side by side on the issues. But this is not a normal election year. A comparison like that would be an empty exercise in a race where one candidate — our choice, Hillary Clinton — has a record of service and a raft of pragmatic ideas, and the other, Donald Trump, discloses nothing concrete about himself or his plans while promising the moon and offering the stars on layaway.”

In a tantalizing parenthetical, the editors tease that an upcoming article will explain in detail why they believe that Donald Trump is “the worst nominee put forward by a major party in modern American history.” We will all wait for that with baited breath. In the meantime, the Times sought to avoid negative arguments that boosted Clinton only because she isn’t Trump. They purposefully set out to make an affirmative case for Clinton:

“Our endorsement is rooted in respect for her intellect, experience, toughness and courage over a career of almost continuous public service, often as the first or only woman in the arena.”

Some other notable observations by the Times’ editorial board include their praise for Clinton as:

“…a determined leader intent on creating opportunity for struggling Americans at a time of economic upheaval and on ensuring that the United States remains a force for good in an often brutal world.”

“She is one of the most tenacious politicians of her generation, whose willingness to study and correct course is rare in an age of unyielding partisanship.”

“Mrs. Clinton has shown herself to be a realist who believes America cannot simply withdraw behind oceans and walls.”

“Through war and recession, Americans born since 9/11 have had to grow up fast, and they deserve a grown-up president.”

That last quote is a fairly transparent slap at Donald Trump. His juvenile behavior, narcissism, tantrums, and name-calling are characteristic of his embarrassing immaturity. Likewise, his refusal to educate himself or assume the other responsibilities of a serious candidate are classic signs of childishness. Not to mention his pathological lying.

Some readers may dismiss the Times’ endorsement as something to be expected from the allegedly liberal newspaper. However, no news outlet has been more critical of Clinton during the course of the campaign. They have feverishly covered stories ranging from Clinton’s email to allegations about the Clinton Foundation. Never mind that all of the efforts of the Times, and every other news enterprise, has failed to find any actual wrongdoing. And the Times has shown blatant bias with headlines that describe Clinton as “dishonest” while softening assertions about Trump as being “creative with the truth.”

Furthermore, the Times is Trump’s hometown paper and has provided him with plenty of positive coverage for decades. So this wasn’t a slam dunk by any means. The conclusions in the endorsement are logically laid out and backed up by factual evidence. Clinton is without question the only serious candidate in the race. Her resume is unparalleled in modern politics. And notwithstanding her shortcomings, she is superior to Trump by every conceivable standard. Stay tuned for the Times’ upcoming assessment of Trump. That should be both entertaining and frightening.