Tonight we witnessed the first face-to-face meeting between Hillary Clinton and Donald Trump. Debate watchers might have expected that Trump would unleash a flurry of falsehoods. They were not disappointed. In the next few hours there will be a great deal of fact-checking going on and Trump’s lies will be revealed in detail. But one exchange in particular deserves some immediate attention. 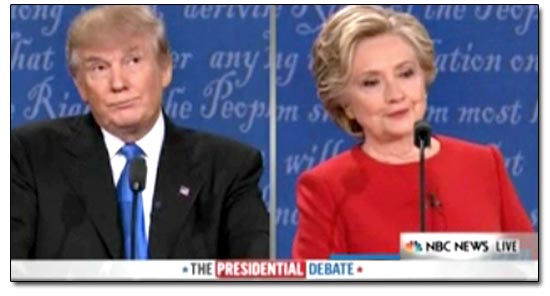 During one segment moderator Lester Holt asked Trump about his obsession with the birthplace of President Obama. He asked:

“Mr. Trump, for five years, you perpetuated a false claim that the nation’s first black president was not a natural born citizen. You questioned his legitimacy. In the last couple of weeks you acknowledged what most Americans have accepted for years, the president was born in the United States. Can you tell us what took you so long?”

Rather than answer the question, Trump set off on a fantastical diversion. He reiterated the lie that Clinton started the racist Birther conspiracy. Then he went further to claim that Clinton’s campaign manager in 2008 admitted it on CNN last week:

“[H]er campaign manager, Patty Doyle, went to — they were in the campaign, her campaign against President Obama, fought very hard – and you can go look it up and you can check it out – and if you look at CNN this past week, Patty Solis Doyle was on Wolf Blitzer saying that this happened.”

OK. So I did look it up. And guess what I found. Trump was lying through his capped teeth, as usual. From CNN:

“‘The campaign, nor Hillary, did not start the birther movement. Period. End of the story,’ Patti Solis Doyle told CNN’s Wolf Blitzer.”

.@HillaryClinton or her '08 campaign DID NOT start birther movement. Period. I was there.

Trump attempted a similar dodge on the day he announced that he was accepting Obama’s citizenship. He told the assembled reporters that “Hillary Clinton’s campaign first raised this issue to smear then-candidate Barack Obama in her very nasty, failed 2008 campaign for President.” It wasn’t true then and it isn’t true now. Nor was it true a year ago when he tweeted:

Just remember, the birther movement was started by Hillary Clinton in 2008. She was all in!

The truth is that this blatant lie was exposed long ago. In September of last year PolitiFact did an extensive investigation and concluded that:

“There is no record that Clinton herself or anyone within her campaign ever advanced the charge that Obama was not born in the United States. A review by our fellow fact-checkers at Factcheck.org reported that no journalist who investigated this ever found a connection to anyone in the Clinton organization.”

Donald Trump can’t help himself. He is a pathological liar (see the Trump Bullshitopedia) who repeats his deliberate falsehoods even after he has been corrected. It’s a pattern that is familiar to anyone watching his campaign. And it didn’t take long for it to emerge in this debate. There were certainly more lies told by Trump in the 90 minutes that he ranted, blustered, and interrupted. And there will be even more in future debates and on the campaign trail. So stayed tuned – if you can stomach it.