It seems like every week is one that can arguably be described as Donald Trump’s worst week ever. And that surely applies to this week wherein the President had his lawyer go on Fox News and tell Sean Hannity that he reimbursed his personal attorney for the hush money paid to Stormy Daniels. And his pals at the National Enquirer went after Michael Cohen. And reports reveal the Cohen’s phone calls have been monitored by the Feds. 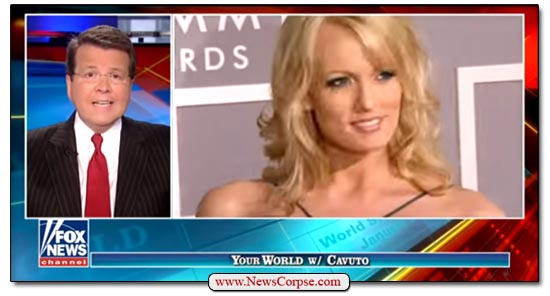 Add to these setbacks a surprisingly critical monologue from Fox News host Neil Cavuto (video below). Cavuto has been one of the most reliable Trump supporters on the network. However, something must have clicked because this segment is bitingly harsh as he firmly renounces a cornucopia of Trump’s lies. The lecture addressed directly to Trump begins with Cavuto saying that:

“President Trump is fond of calling out the media on “fake” news. But is he the one giving them very real ammunition? Maybe not intentionally. I’ll even give you the benefit of the doubt, Mr. President, and say maybe not deliberately. But consistently. Way too consistently. So let me be clear Mr. President, how can you claim to be draining the swamp if you’re the one that keeps muddying the waters?”

Then Cavuto rattled off a series of Trump’s most recent and flagrant lies. He cites the hush money payment to Stormy Daniels; his denial of knowledge about MIchael Cohen’s activities on his behalf; his specious claims that there were no campaign finance violations. In each instance Cavuto noted that Trump stuck to his false claims until they could no longer be denied or his own party comrades debunked them.

Cavuto went on to itemize Trump’s catalog of obvious untruths such as claiming that the Russians didn’t interfere with the 2016 elections, and his subsequent denial that he ever made that claim; that his tax plan was the biggest ever; that those tax cuts would cost him a fortune; that his job approval numbers were better than his predecessors; that media reports that senior staffers (Secretary of State, Chief-of-Staff, economic advisor, political strategist, etc) were about to be fired were fake. Cavuto even brought up Trump’s denials that his lawyers (Dowd, Cobb) would be leaving, and that he denied ever considering firing Robert Mueller.

And even after that barrage of friendly fire Cavuto wasn’t done. He called Trump out for falsely saying that he signed more bills than any other president. And that he raised the national debt by over a trillion dollars despite claiming that he reduced it. And that there was massive voter fraud in New Hampshire and Virginia, and millions of illegal voters nationwide. And that his alleged electoral college landslide eclipsed those before him.

It was a brutal damning of Trump’s notorious dishonesty and aversion to the truth. Although Cavuto tried to to insert softening agents every now and then such as “Now I’m not saying you’re a liar,” and “None of this makes me a Never Trumper,” and “None of this makes you evil,” and “None of this makes what you say fake.” Why the heck not? Actually, all of that makes him a liar and what he says fake. But Cavuto can only go so far. And for him this is light years. He closed with an especially pungent censure of the President that would surely sting if his handlers ever let him hear it:

You have to wonder what happened in the editorial suites at Fox News that allowed this diatribe to make it onto the air. Perhaps there are people in the executive ranks who see the writing on the wall (which Trump will never build) and don’t want to get sunk along with the President when Mueller’s probe is completed. Fox News may be trying to hedge their bets a little in case the raid of Cohen’s offices turned up incriminating evidence. Whatever the reason, it appears that Trump might not be able to always depend on Fox News to cover his backside. Of course, this may be an anomaly, so it’s too soon to draw any conclusions. Stay tuned.

2 thoughts on “Staunchly Pro-Trump Fox News Host Calls Him Out on His Lies: Mr. President, That’s Your Stink”