The walls are continuing to close in around Donald Trump. And they aren’t border walls. With the sentencing of his former associates, Michael Cohen and Paul Manafort, there is more information being released that unambiguously implicates Trump in federal crimes. And, as is his customary practice, the more he feels threatened, the more hysterical he gets. He is transparently consumed by fear and desperation. 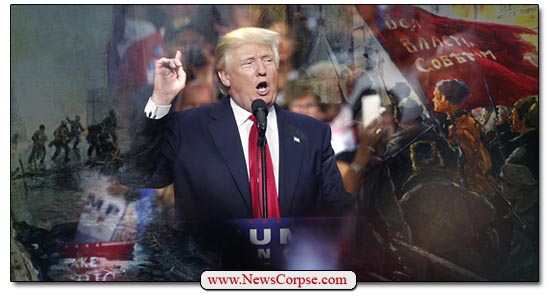 That response was in effect Tuesday when Trump was interviewed by Reuters. The whole interview was woven with lies and nonsense. But one particular part is worthy of notice. When Trump was questioned about talk that he could be impeached for crimes related to his campaign and and his unsavory connections to Russia, he blew up:

“It’s hard to impeach somebody who hasn’t done anything wrong and who’s created the greatest economy in the history of our country. “I’m not concerned, no. I think that the people would revolt if that happened.”

Let’s set aside – after laughing uncontrollably – the patently untrue assertions that Trump has done nothing wrong, or that he’s responsible for the “greatest economy” in history. What is stunning about his comments is his warning that there would be a revolt if he were held accountable for his criminal activities. In fact, this is less a warning than it is instructions to his cult followers. He expects them to resort to violence on his behalf in the event he is impeached by the representatives of the American people.

There are lots of reasons to consider Trump’s impeachment. He shelled out hundreds of thousands of dollars to his mistresses in order to keep them quiet before the 2016 election. He failed to disclose those expenditures. He has received millions more from foreign operatives funneling money to him through his hotels and other businesses. He and his closest associates have lied repeatedly about his conspiracy to steal the election with his Russian partners. So impeachment is not much of a stretch for such a flagrant law violator, and a bad one at that.

Even more troubling is the fact that this isn’t the first time Trump has threatened violence directed at his critics. Even during his campaign Trump threatened the outbreak of riots if he was denied the nomination. Almost daily he refers to the media in Stalinist terms as “the enemy of the people.” He has accused the press of “creating violence by your questions […] The fake news is creating violence.” He accused Democrats in Congress of treason for not applauding him at the State of the Union address. “Can we call that treason?” he said. “Why not? I mean, they certainly didn’t seem to love our country very much.” He suggested that the media also committed treason with its coverage of his summit with Kim Jong Un, saying that “It’s a shame the fake news covers it the way they do. It’s really, it’s almost treasonous, you want to know the truth.” Do you detect a pattern?

If you think that this sort of hostile rhetoric is petty trumpery (“worthless nonsense” according to Merriam-Webster), you might want to refer to the polling that shows that one-third of Trump voters say Democrats who didn’t applaud during the State of the Union were “treasonous.”

And you might also note Trump’s obsession with maligning his critics as anti-American. For instance, there was the time he responded to an op-ed in the New York Times by an anonymous White House staffer who called Trump “amoral,” “unstable,” “erratic,” “ill-informed,” and “reckless.” The author further worried that the President has “a preference for autocrats and dictators.” And that other staffers were “working diligently … from within to frustrate parts of his agenda and his worst inclinations.” In response to that article Trump blasted off four tweets attacking the Times, one of which contained a single word:

And that pretty much sums up the position of this wannabe dictator in the White House. He truly believes that any dissent is tantamount to treason, and the consequences of that is death. That’s the message that Trump is sending out to his glassy-eyed cult disciples. And this latest message raising the prospect of “revolt” is another escalation in his war against America, democracy, and freedom.

4 thoughts on “Trump Saying ‘People Would Revolt’ if He is Impeached is Not His Opinion, It’s an Instruction”