Donald Trump and his Republican Nationalist Party got exactly what they wanted for Christmas: A federal court ruling that the Affordable Care Act (aka ObamaCare) is unconstitutional. Trump’s PR division at State TV (aka Fox News) literally celebrated the decision as a Christmas “gift.” And although many legal experts predict that the ruling will be overturned, The Trump administration is giddily slopping it up and basking in the afterglow of millions of Americans losing their healthcare coverage. 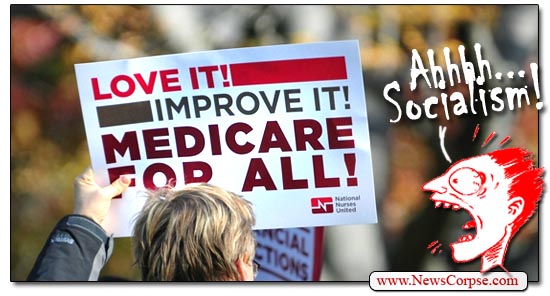 In the meantime, Trump is gloating at what he mistakenly believes is a final victory in his war against all things Obama. His immediate responses to the ruling were to brag about having predicted it, followed by totally disingenuous calls for the two parties in Congress to work together to craft a brand new healthcare bill from scratch:

As I predicted all along, Obamacare has been struck down as an UNCONSTITUTIONAL disaster! Now Congress must pass a STRONG law that provides GREAT healthcare and protects pre-existing conditions. Mitch and Nancy, get it done!

Never mind that Republicans had eight years to offer a replacement healthcare bill but could never do so. Now, to these insensitive remarks that ignore the suffering that millions of Americans would be forced to endure if ObamaCare were to actually be revoked, Trump added another on Monday morning:

The DEDUCTIBLE which comes with ObamaCare is so high that it is practically not even useable! Hurts families badly. We have a chance, working with the Democrats, to deliver great HealthCare! A confirming Supreme Court Decision will lead to GREAT HealthCare results for Americans!

The notion that Trump really wants to work with Democrats is laughable on its face. He has been the most hostile president to the opposing party in modern times. He has not simply disagreed with Democrats on policy or advocated for the positions of Republicans. Trump has lashed out with malicious and personal insults aimed at the party and individual members. More than two years after the election he is still shrieking at Hillary Clinton over matters that have long been resolved. And his seething hatred for Democrats still dominates most of his thoughts. For instance:

So now that Democrats have won majority control of the House of Representatives, Trump is feeling harmonious. Now that whatever leverage Trump had has been eroded due to the multiple criminal investigations encircling him and his crime family, he is pretending that he wants to work with Democrats to restore healthcare benefits that he and his GOP accomplices have deliberately sabotaged. Yeah, right. And this is all going down simultaneously with his threats to shut down the government over his idiotic and useless border wall.

There is one thing in Trump’s latest tweet that has a ring of truth to it, although not in any way that he intended. When he says that “A confirming Supreme Court Decision will lead to GREAT HealthCare results for Americans,” he may be right. Because it could lead to the implementation of Medicare-for-All. It’s already a program whose popularity is growing by the day. And with the GOP putting ObamaCare in jeopardy, more Americans, and their representatives, are going to insist on the protection of their rights and the pursuit of what’s best for their families. So we may owe Trump and his comrades some thanks for advancing universal healthcare and pushing the United States into the ranks of the rest of the civilized world.