There’s nothing like an election to get conservative blowhards to shed some crocodile tears over what they see as the declining fortunes of the Democratic Party. Never mind that the last election in 2018 saw a “blue wave” that swept Democrats into the majority in the House of Representatives and made Nancy Pelosi Speaker. Republicans are never more sympathetic to the threat of Democrats losing voters than when the Democrats are actively and effectively beating up on the GOP. So naturally, right-wing politicos and pundits need to come out with their heartfelt advice to stop the Democrats from hurting themselves. How thoughtful. 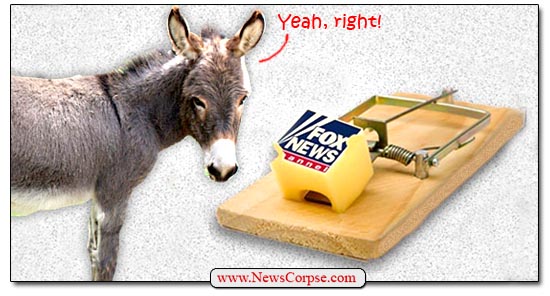 On Tuesday morning, Fox News media analyst, Howard Kurtz, was interviewed by anchor Bill Hemmer about how dreadfully naive Democrats are for appealing to their own constituents, rather than kowtowing to Donald Trump and his cadre of Deplorables. The segment featured a chyron that read “2020 Dems Taking Extreme Positions on Key Issues.” And their examples of how the party is “lurching left” and “blowing their chance to defeat Trump,” were positions in favor of humanitarian treatment of refugees and support of Medicare for All – two issues that resonate with progressives and are wildly popular among Democrats and even many Republicans and independents.

This is a bold demonstration of political altruism on the part of Kurtz and company. Because who would know more about what’s best for Democrats than the staunchly Republican partisans on Fox News who spend most of their time viciously maligning and lying about the party? They nevertheless believe that they are perfectly positioned to give counsel to Democrats who might otherwise destroy their own electoral prospects by advocating for higher wages for workers, higher taxes for corporations and the wealthy, greater access to education, and addressing the imminent risks of the climate crisis. You know, the very issues that define the positive values of the Democratic Party, as well as the majority of Americans. But Kurtz is concerned because…

“What we can say is that some of these positions, way out on the left wing, things that nobody in the party would have said even in 2016, could be a vulnerability next year.”

Really? It’s funny that Kurtz is worried about what are actually mainstream positions that he ridiculously tags as “left wing.” But he doesn’t have a word to say about the radical right positions being taken by Trump and his Republican Nationalist Party. Doesn’t he think that incarcerating children in cages will blow Trump’s chances of being reelected? And what about Trump’s bizarre affinity for murderous dictators like Vladimir Putin and Kim Jong Un? And his hostility toward agreements that made America safer by curtailing the nuclear ambitions of Iran and North Korea?

Isn’t the GOP lurching to the right by repeatedly cutting taxes for the rich? Aren’t they pandering to GOP fanatics by rejecting the Paris accords on climate change? Won’t Trump’s sabotage of ObamaCare and determination to end popular protections for preexisting conditions drive voters away? And then there’s his relentless pursuit of a useless, idiotic, vanity wall along the southern border that most Americans oppose.

Why is it that wingnuts like Kurtz always pretend to be concerned about where Democrats are on the ideological spectrum? They would never countenance Democrats offering such advice to Republicans. You’ll never see Kurtz, or anyone on Fox News asking if Trump is blowing it by pandering so obsessively to his dwindling, cultist base.

If anyone should be worried about blowing 2020, it’s Donald Trump. His approval ratings are in the basement. He is the first president in history who has never cracked 50 percent. His positions are unpopular. He is regarded as a lying loudmouth who doesn’t know what he’s talking about on any subject. Meanwhile, the motivation of Democrats to vote next year forecasts a historically high turnout. That isn’t exactly good news for Trump and his paid shills at Fox News. But not to worry. They will never see those danger signals as warnings to moderate their regressive fanaticism.

One thought on “Awww: Fox News Worries that Democrats Might Be ‘Blowing Their Chance to Beat Trump’”