This is the inaugural edition of a new feature: Fox Nation vs. Reality.

There have so many incidents of the Fox Nationalists distorting stories from other sources that it warrants special attention to illustrate their relentless dishonesty. A recent example was their twisting of an Associated Press story with the headline, “Economic worries pose new snags for Obama.” Fox Nation contorted that into, “Obama Has A Big Problem With White Women.” And the article had little to do with women, white of otherwise.

Today Fox Nation posted a story that linked to Greg Sargent’s column in the Washington Post, “Obama campaign to go on the offensive against conservative critics of Israel stance.” The Fox version became, “Obama Campaign To Go After Conservative Critics Of Anti-Israel policies.” 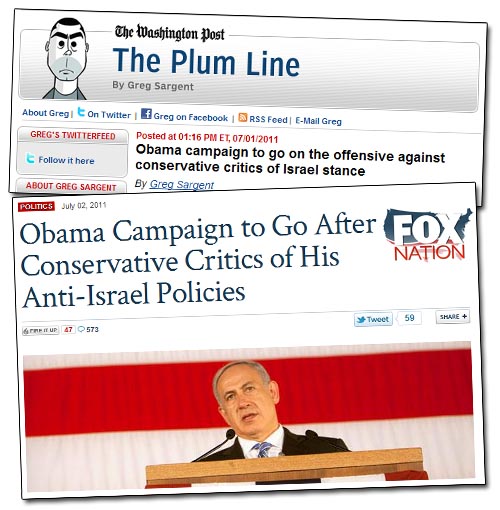 The Post version, and the article that followed, was a neutral description of a proposed strategy being discussed by Obama insiders. It was an entirely rational response to attacks on the President by Republican opponents trying to muddy the waters for Jewish voters.

The Fox version inserts commentary that presumes the existence of administration policies that are anti-Israel. Of course, that is false. Every credible analyst, including Israeli Prime Minister Benjamin Netanyahu, agree that Obama’s positions are closely aligned with Israel’s best interests and that the two nation’s alliance is as strong as ever.

The Fox Nation doesn’t care about the facts. They only care about how badly they can mangle reality so as to keep their audience mired in ignorance.

One thought on “Fox Nation vs. Reality: On Israel”