The Republican Party has devolved into nothing more than a culture war slogan dispenser, spending all of its time and energy contriving faux outrage and divisiveness. They have no discernible policies to promote and are relying on the cult appeal of Donald Trump to sustain them until the next election.

Consequently, The GOP’s Ministry of Propaganda (aka Fox News) is focused tightly on critical issues like Dr. Seuss and Mr. Potato Head. And they’re tired of hearing about all the dead Americans due to the COVID pandemic that Trump ignored and/or botched. Meanwhile, Republicans in Congress voted unanimously against the American Rescue Plan, the most popular legislation in generations.

This callous disregard for the welfare of the nation is integral to the Republican agenda going forward. But since they have no affirmative plans, they are reaching back to distort recent history and claim victories that exist only in their fevered imaginations. For instance, Ronna Romney McDaniel, the chair of the Republican National Committee, tweeted Saturday morning that “As President Trump was delivering results on the vaccine, Joe Biden was sowing doubt about its efficacy…”

As President Trump was delivering results on the vaccine, Joe Biden was sowing doubt about its efficacy.

Biden in July 2020: “People are already saying, if we get a vaccine I’m not sure I’m going to take it, this guy's lied to us about everything else."pic.twitter.com/XqN14ahMpS

Let’s set aside that McDaniel is still referring to the former guy as “President,” but the current president as “Joe.” The more salient point is that there is nothing resembling the truth in that twantrum. What Biden actually said last July in the video that McDaniel posted is that…

“We’ve got to make sure vaccines are produced and distributed safely, efficiently, and fairly, with independent FDA transparency. And the full FDA public report made public. Because people are already saying ‘If we get a vaccine I’m not sure I’m going to take it. This guy’s lied to us about everything else.'”

Clearly President Biden was not sowing doubts about the vaccine. He was recognizing that the American people already had fully justifiable doubts about Trump’s honesty. All Biden was calling for was full disclosure of the data that would lead to the vaccine’s approval. The fact that so many people don’t trust Trump is what Biden was concerned about. And his remarks were intended to resolve any hesitancy to getting vaccinated, not sow doubts about it.

McDaniel was also wrong about Trump “delivering results on the vaccine.” He had done nothing productive other than inventing a PR campaign that he dubbed “Operation Warp Speed,” which was just another sham that accomplished nothing. In reality, last July Trump was still downplaying the severity of the pandemic, while boasting about phony “achievements” … 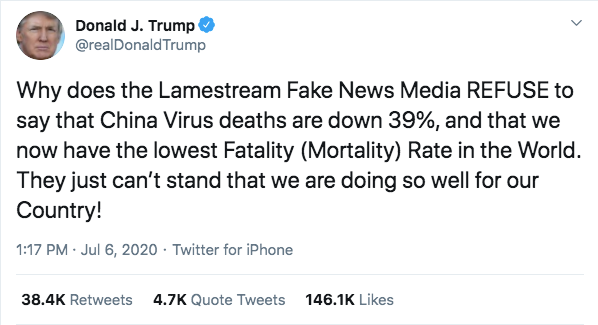 Trump was bragging about “doing so well” when the death toll for the coronavirus was at 150,000. That was horrible. But it’s more than tripled since then. And in light of that, McDaniel thought it would be useful to post a tweet that lied about Trump’s negligence and incompetence, while inadvertently affirming Biden’s honesty and foresight. Thanks, Ronna.