There’s one thing you can say about Fox News, and that is that they know their audience. They know that they are serving an intellectually lazy group of rightist zealots who, more than anything else, just want their prejudices to be affirmed. And Fox News is more than happy to accommodate them.

This morning on Fox & Friends, home of the most prideful ignoramusi in television, Brian Kilmeade interviewed David Gelernter, the author of “America-Lite: How Imperial Academia Dismantled Our Culture (and Ushered In the Obamacrats)” The discussion centered on the assertion that those darn kids today just aren’t as super-spectacular as previous generations. Gelernter, a Yale professor, castigated universities and disparaged American students as “learning nothing, apart from how to play with their iPhones.”

The dialogue continued with both Kilmeade and Gelernter insulting President Obama, and liberals in general, as airheads. He even questioned the President’s patriotism saying, “I think he has no sense of obligation to the country. I think he has a vivid sense of what the country owes him.” That’s a veiled reference to the racially incendiary subject of reparations, which Obama has never supported. Talk about dog whistles. The segment also featured a couple of definitions that exist nowhere but in the minds of devoted right-wing demagogues:

Obamacrat: A new generation of politicians who don’t think very much and aren’t concerned about their country.
Airhead Liberal: Accepts liberal political ideas religiously, but never questions them.

And Fox News is not coy about their aversion to being smart. The graphic below explicitly belittles knowledge and Americans who “rely on IQ instead of common sense.” Heaven forbid anyone with actual, demonstrated intelligence be given a role in the affairs of state. 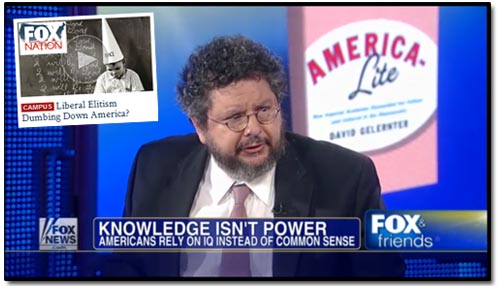 The notion that knowledge is a toxic virus that infects elitist liberals and must be exterminated, is a recurring theme on the right. They are overtly hostile to education and regard people who have excelled academically as out-of-touch and even threatening to the their conception of American society. And while there is, of course, a place for common sense, the thing about it is that it is “common.” What ever happened to American exceptionalism and the idea that we can aspire to greatness? Such talk is now considered to be an abandonment of the common man.

Conservatives, through their Fox News mouthpiece, are openly advocating for ignorance. And the reason for that is that they know they can manipulate an incurious, ill-informed population far easier than one that is educated. That is why they denigrate Obama’s achievements at Harvard Law (even though they ignore Romney’s two Harvard degrees). It’s why they oppose legislation that makes higher education available to more Americans. It’s why they even advocate eliminating the Department of Education.

It is no surprise that several studies have shown that Fox News viewers are significantly less informed than consumers of other sources of news. And while pseudo-patriots chant “We’re number one,” the international rankings put the U.S. at 14th in reading, 17th in science and 25th in math. That is not a foundation from which viable competitiveness is likely to emerge. And bashing education is not a path to resolving these problems.

The GOP is practicing something I call Elitistism: the practice of discriminating against those who are perceived to be elite. The goal of Elitistism is to drive from public life anyone who diverges from the sacred visage of American Averagism. Because everyone knows that the guy you’d rather have a beer with is the best qualified to be president. Although the cold brew may have been replaced by the tea bag, and the barfly by the Tea Hag™ (i.e. Sarah Palin). And whatever you do, don’t exhibit any qualities of excellence or intelligence. As I have previously written, in today’s politics those are flaws that separate you from the masses:

“Education is a key component in this new paradigm. It is absolutely critical that you not have too much of it. And never, ever use the word paradigm. Once the American people get the impression that you know more than they do about issues like economics or foreign policy, you’re disqualified from service. Achievement and expertise only spotlight how different you are from ordinary Americans.”

Today’s segment is further evidence that Fox News not only promotes ignorance, they actually celebrate it, as they pander to their audience that wallows in it. Pretty soon we can expect to have parades of idiots inspired by Fox proudly marching down Main Street chanting “We’re dumb. We’ve come. Get used to it.”

4 thoughts on “Idiocracy: The Fox News War On Intelligence”