In an op-ed for the New York Times, Bill Maher addressed the ongoing controversy over civility (or the lack thereof) by public figures in broadcasting, entertainment, and politics. As might be expected, the comedian had a few prime punchlines dispersed throughout the piece that essentially argued in favor of offensive speech. For instance:

The article began by correctly pointing out that a joke by Robert De Niro about whether the country was ready for a white first lady was wholly non-offensive and any umbrage taken was purposefully faked by people who “pretend to be outraged about nothing.” But, unfortunately, Maher went further to propose what he thinks would be an appropriate response to actual hate speech:

“If you see or hear something you don’t like in the media, just go on with your life. Turn the page or flip the dial or pick up your roll of quarters and leave the booth.”

Maher’s position seems to be that free speech is exercised only by the first person to speak. If that person says something that offends someone else, the obligation of the offendee is to clam up and walk away. I couldn’t disagree more.

Free speech is a right granted to everyone, and the exercise of it is not limited to whoever gets to the microphone first. Responding to the comments of others with whom you disagree is still protected speech and is a part of the great tradition of open discourse in America. If Rush Limbaugh calls a law student a slut, it is entirely appropriate for people offended by that to respond, criticize, and even engage in protests and boycotts. The same is true for those offended by Maher. That is not censorship – it is the complete realization of the meaning of the First Amendment.

As usual, the pimply-faced editors at the Fox Nation continue to demonstrate their most juvenile tendencies by, once again, referring to Maher with an insulting epithet: Pig Maher Calls for Truce. First of all, Maher did not call for a truce. In fact, he called for continuing to use controversial language but advising people not to get upset about it. Secondly, isn’t it cute the way the Fox Nationalists use a story about toning down uncivil rhetoric by using uncivil rhetoric in their headline? And these people want to be regarded as legitimate “news.” 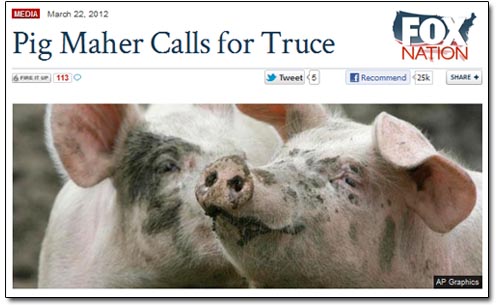 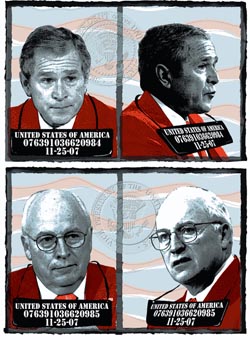 A couple of days ago Bill O’Reilly again demonstrated his aversion to free expression as well as his penchant for dishonesty. An op-ed that appeared in the Seattle Post-Intelligencer (a paper that O’Reilly regularly castigates as “far-left loons”) laid out a case for Impeachment: If not now, when? The column was accompanied by a political cartoon that had Bush and Cheney dressed up for their mugshots.

That was more than enough to set O’Reilly off on a rant that amounted to a call for censorship (YouTube):

“Look at this. This is ridiculous […] It’s based on nothing […] I want you to excoriate them. Let them have it […] It’s wrong though for them to do it. Don’t you think that showing a mug shot of a sitting president, a sitting vice president is irresponsible?”

O’Reilly is outraged that anyone would exercise their First Amendment rights to express an opinion about the criminality of this administration. He believes that such open expression “diminishes intelligent conversation,” (as if O’Reilly ever engaged in one) and his response is to shut down conversation entirely. Note that O’Reilly is complaining about the cartoon, not the content of the article. Although he does say that the cartoon is “based on nothing,” despite the fact that it is attached to a well-documented column that enumerates specific justifications for investigating the President and his administration.

After once again calling the paper “loons,” (an example of his idea of “intelligent conversation”) O’Reilly attacks the paper’s credibility by smugly declaring that it has lost 40% of its readers in the past ten years:

“Almost half of their readers have said ‘We don’t like you anymore, we’re not going to read you.'”

What O’Reilly leaves out is any actual context that would enlighten his viewers. The truth is that almost all major newspapers have suffered sharp declines in circulation over the past ten years. But more to the point, in only two years (Sept 2005 to Sept 2007) Bill O’Reilly himself has lost 33% of his total viewers and a whopping 59% of viewers in the all-important 25-54 age group. That’s more than half of his viewers saying, “We don’t like you anymore, we’re not going to watch you.”

This brief exchange reveals much about O’Reilly. It shows that while he is vociferously objecting to the free speech rights of others, he will use his own platform to misinform his viewers. No wonder they don’t like him anymore.