OK, first of all this is not an article about the tragic conflict in the Middle East that has been raging for decades. There will be no taking of sides or opinionating on blame. This is about how Fox News purposefully contorts their coverage to make President Obama look bad. Of course, that isn’t exactly breaking news either. 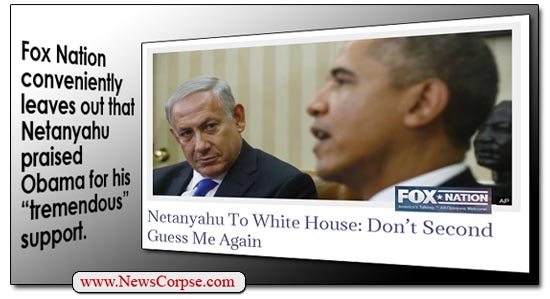 The headline at the top of the lie-riddled Fox Nation website purports to convey a warning from Israel’s Prime Minister Benjamin Netanyahu to President Obama: “Netanyahu to White House: Don’t Second Guess Me Again.” There are a couple of problems with that headline. First of all, Netanyahu did not direct that comment to the White White House. He was on a conference call with the diplomats at the State Department. Secondly, it was not a warning. It was more of an I-told-you-so relating to the recent 72 hour cease fire that Hamas violated within ninety minutes. Netahyahu was making the point that he was correct when he expressed doubts about the trustworthiness of Hamas.

But what really stands out is that Fox News chose to feature this remark on Sunday in their most prominent position while failing to even report another comment from Netanyahu. The “second-guess” comment occurred on Friday. On Saturday Netanyahu held a news conference where he delivered a very different message:

“In a news conference Saturday, Prime Minister Benjamin Netanyahu said Israel would take all the time it needs to eradicate the threat of Hamas from Gaza. He did not mention the scheduled truce talks but did say the U.S. has been “terrific and has given us tremendous support during the Gaza crisis.”

Fox News made an editorial decision to keep this statement of solidarity and appreciation a secret from their audience. It’s just another reason why their audience is so dreadfully ignorant of the world around them. But it isn’t surprising for Fox News. They have long sought to invent some sort of animosity between Obama and Netanyahu. Here are just a few of their recent headlines:

This isn’t a coincidence. It’s a strategy. Fox News is so determined to demean our President that they don’t care if doing so undermines U.S. foreign policy or exacerbates the harm to victims of a brutal war. That tells you something about where Fox’s priorities lie.

2 thoughts on “Fox Nation vs. Reality: On Abandoning Israel – Who Says Obama Has Been “Terrific””