Psychiatrists may have to come up with a name for the acute psychosis displayed by the lunatics at Fox News who compulsively struggle to turn every news item into an attack on liberals. It doesn’t matter how completely unrelated it is, Fox will spin it into a juvenile insult aimed at whatever lefty (or perceived lefty) they have handy.

Today’s example of this mental illness comes to us from Greg Gutfeld, who devoted his segment on The Five (video below) to an entirely imaginary scenario springing from an incident involving actor Robert Downey, Jr. During a round of promotional interviews for his upcoming movie “Avengers: Age of Ultron,” Downey abruptly walked out after the interviewer repeatedly diverted from the topic of the film promotion to delve into the ancient history of Downey’s troubled past. 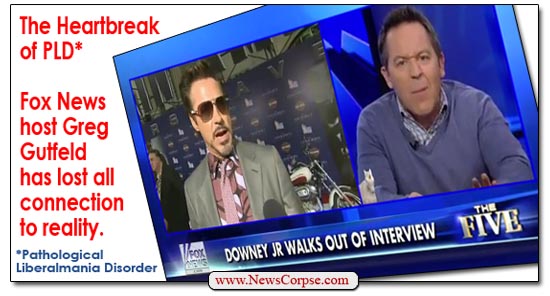 This episode of Pathological Liberalmania Disorder (PLD) produced a torrent of seizures in Gutfeld that resulted in an uncontrollable period of incoherent articulation. It lasted for several minutes on the air as Gutfeld blamed liberals for Downey’s perfectly rational behavior.

Gutfeld: The questioning veered toward an embarrassing scandal that could threaten Downey’s career. It turns out a few years ago Downey said he wasn’t a liberal. I know. Deep breaths everyone. See, in the world of entertainment saying that you’re not a liberal is like admitting that you molest goats or don’t own a Prius. The host saw what he thought was controversy and went to pick the scab.

The classic symptoms of PLD are present here with Gutfeld imagining that Downey’s career was at risk for something that never actually harmed him or any other actor. The conservative politics of Charlton Heston, Bruce Willis, Clint Eastwood, and many others (see the Friends of Abe), never interfered with their work. But the severity of Gutfeld’s disease was even more apparent as he characterized the reasons for Downey’s reaction. First, here is what took place in the interview:

Interviewer: It was after your incarceration. You said that you can’t go from a $2,000 a night hotel suite to a penitentiary, and understand it, and come out a liberal. I just wonder what you meant by that.

Downey answered that question a bit hesitantly as he wondered what it had to do with the Avengers. But he gave a complete answer saying that he couldn’t really define “liberal” and that his views are always evolving. Then…

Interviewer: You’ve talked in other interviews again about your relationship with your father and the role of all of that. You know, the dark period you went through, taking drugs and drinking, all of that. And I just wondered whether you think you’re free of all of that?

That was when Downey calmly got up and made his way to the door. He was smiling the whole time and even made a little joke as he left the room. However, Gutfeld’s radically distorted perception of this event manifested in this hysterical rant:

Gutfeld: Now most of the reports make it sound like this was about a guy asking about drugs. But it wasn’t. Not at all. The reporter was nailing Downey for not being a total lib.

Gutfeld goes on much longer than that with what he seems to think are witty broadsides at hapless liberals. Clearly he has ventured far from reality. The small portion of the interviewer’s questions that involved Downey’s past comments about liberalism were hardly “nailing” him for anything. The question literally asked “what you meant by that?” That’s a pretty noodley nail. And, in any event, Downey responded to that question. But how Gutfeld can say that the interviewer wasn’t asking about drugs, “not at all,” is mind-boggling. That is specifically what he asked about, and it wasn’t until he did that Downey chose to leave.

This illustrates the disorder that many conservatives suffer from when trying to comprehend liberals, a difficult task for the limited right-wing brain. They have a desperate need to either blame them for things that are plainly unrelated, or to allege that they are attempting to distract from some other imaginary failure. It happened elsewhere this week when Rush Limbaugh suggested that President Obama revealed that a drone attack earlier this year killed an American and an Italian hostage in Pakistan. Limbaugh claimed that it was a ruse to divert the press from the recent book about Hillary Clinton (which was debunked before it was even released).

So what we have here is Gutfeld frantically trying to turn the affair into an attack on liberals, an interpretation that can only exist in a severely diseased mind. These symptoms were also seen in Glenn Beck, who made the very same delusional observations that Gutfeld made about the Downey interview. This suggests that the disease may be contagious, or at least subject to a form of mass hypnosis. The latter theory would be consistent with the Fox News pathology that uses hypnosis via cable TV to manipulate their notoriously dimwitted viewers. And unfortunately, there isn’t a cure for either one of these maladies yet, other than doses of factual information and injections of logic. Sadly, the supply of these treatments is dangerously low in the media world.