If there is one thing that Donald Trump can be credited with, it’s sucking all the air out of the media and preventing every other right-wing lunatic from advancing their ultra-conservative agenda. In order to get any attention from the tabloid-obsessed press, it’s necessary to be even more bizarro than The Donald himself. The Republican candidates for president are finding this out in a big a way, and now so is has-been, half-governor, VP-flop, reality show loser, Sarah Palin.

Palin’s entry in the 2015 Trumplympics is a Facebook posting that features images of a Confederate flag and the Planned Parenthood logo. Her caption reads: “Which symbol killed 90,000 black babies last year?” 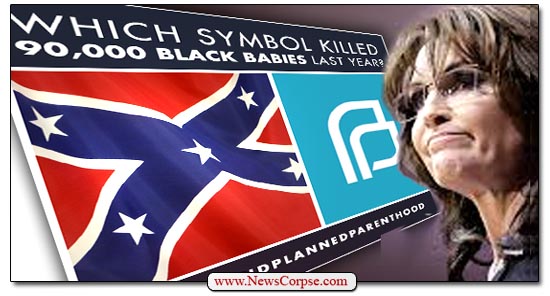 Of course, it’s a trick question because everyone knows that symbols don’t kill people, people do. And the people behind the Confederate flag were responsible for killing millions of African-Americans before, during, and after the Civil War. In fact, as we saw last month in Charleston, South Carolina, they are still doing it.

On the other hand, Planned Parenthood cannot be shown to have killed anyone. The premise of the anti-choice activists that life begins at conception, has never been proven scientifically. And abortion is still a legal means of terminating a pregnancy that has resulted in saving untold numbers of lives of women who would otherwise have been relegated to back alleys and medical charlatans.

Palin’s desperation for attention has compelled her to make one of the most nauseating ideological comparisons imaginable. The pro-choice movement is not unaccustomed to vile attacks including associations with historic evils like the Holocaust. It would be bad enough if Palin were trying to smear Planned Parenthood by asserting that it was somehow like the loathsome racists of the Confederacy. But she isn’t. She’s actually arguing that slaveholders and their descendants are praiseworthy next to an organization that provides health care, cancer screenings, birth control, and even prenatal services for women.

Planned Parenthood not only doesn’t kill people, it saves lives every day. What Palin is engaged in now is a coordinated right-wing attack on Planned Parenthood to destroy it by cutting off federal funding. In reality, this effort is another front in the Republican War On Women. Yet defunding Planned Parenthood would have almost no effect on abortion in America. That’s because only 3% of Planned Parenthood’s services are abortion related. It is the other vital health care services that women rely on that will be constrained if Palin and her GOP pals in Congress get their way. And, ironically, the result would be not only more women suffering with undiagnosed or untreated illnesses, but more unwanted or unplanned pregnancies.

In addition to the Confederate worship, Palin posted another graphic that reads: “80% of Planned Parenthood clinics located in minority neighborhoods.” What this tells us is that, not only is Palin an abhorrent racist, she is also an ignorant purveyor of virulent myths. The message she is passing along here is a favorite of organized bigots. It has also been proven to be untrue by many independent sources. One of them, Factcheck.org, researched similar claims and wrote that “There’s no evidence that was true then. And today, only 9 percent of U.S. abortion clinics are in neighborhoods where half or more of residents are black.” But Palin couldn’t be bothered with doing her own research and presenting the facts.

It’s not a coincidence that Palin’s flurry of Facebook posts were joined together by their connection to racist propagandists. But even for her it is somewhat surprising that she would so openly embrace such bigotry. And the explanation has to be that she has been despondent since being jettisoned by Fox News and getting upstaged by Trump. So she’s doing what she has to do get her dimwitted minions to notice her again. Buckle up, kids. This could get ugly….er….uglier.