I want to apologize in advance for writing this article. I tried my best to avoid it but, in the end, this was too important to pass up. In just two months America will be deciding who will lead this nation and this fundamental issue needs to be on the record. 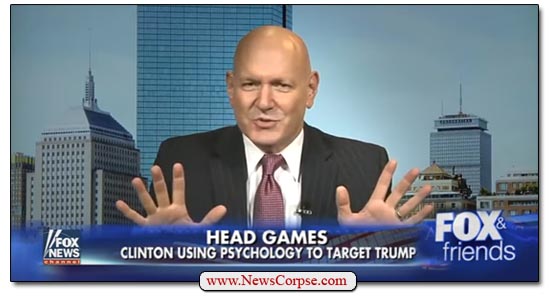 The “Curvy Couch” potatoes of Fox & Friends were stirred up after hearing that Hillary Clinton was “consulting psychologists about Trump’s biggest insecurities to bait him into making mistakes on the debate stage.” So they brought in “Dr.” Keith Ablow, a member of the Fox News Medical A-Team, to give his professional psychiatric opinion about Clinton’s debate prep.

Ablow’s response briefly touched on the subject, but quickly diverted to another area that was more closely associated with his specialty – exalting perverts. Ablow inexplicably swerved off into a discourse on the courage Donald Trump showed by bragging about his manhood:

“I have to say, when the small hands issue was raised during the debate, this supposedly got the Clinton campaign very excited. They thought, ‘Man, he’s off his game.’ He wasn’t off his game at all. Freud would have been standing up, like applauding, standing ovation. To be able to address such an intensely personal issue and say, ‘Listen, there’s no problem in that department,’ to me that showed an incredible degree of psychological strength.”

Of course. The first indication of psychological strength is when someone is so insecure about themselves that they have to convince twenty million strangers how well endowed they are. It’s particularly admirable when such boasting is done in pursuit of the presidency. In Ablow’s mind democracy will be perfected when debates are replaced with dick measuring contests (sorry Hillary).

Ablow can add this to his other political diagnoses that found merit in the most repulsive character flaws. For instance, he recently praised Trump’s narcissism as “exactly what America needs.” He declared that Newt Gingrich was honorable for being unfaithful to multiple wives. And he even praised the Unabomber’s sociopathic philosophy.

All of these actually apply to Trump pretty well. He has obsessive penis envy; he is a textbook narcissist; he has also cheated on multiple wives; and his approach to public service is rife with sociopathic tendencies. These are the key components of the Cult of Trump.

So thank you, Dr. Ablow, for once again revealing your ignorance of the human mind. A few months ago Trump insulted his own followers by saying they were so stupid they would continue to support him even if he shot someone on Fifth Avenue. Apparently Ablow is among that glassy-eyed assembly of disciples. If Trump confessed to being a crack addict or a pedophile Ablow would praise his commitment to stick to unpopular positions. No matter what horrific personality disorder Trump displays, Ablow will spin it into a virtue. And Fox News will give him a platform to spread his nauseating psychobabble.