On Wednesday the precarious fate of Donald Trump’s presidency took a turn for the worse. Deputy Attorney General Rod Rosenstein announced the appointment of a special counsel to investigate the President’s connections with Russia. Former FBI Director Robert Mueller was tapped for the job. The scope of his inquiry will likely encompass Trump’s campaign and short residency in the White House. 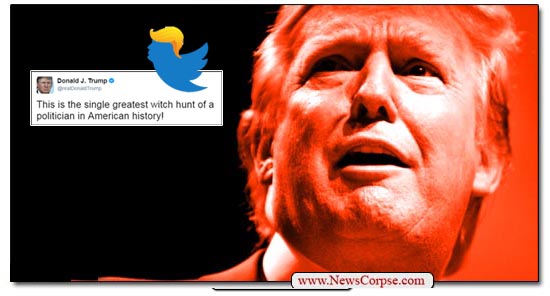 It’s only been a few hours since this news broke, but that’s all it took for Trump to demonstrate a troubling incoherence on the subject. The first response from the administration was a formal written statement that had an atypical restraint and decorum. It said:

“As I have stated many times, a thorough investigation will confirm what we already know — there was no collusion between my campaign and any foreign entity. I look forward to this matter concluding quickly.”

Not surprisingly, that composure didn’t last long. Thursday morning Trump must have regained control of his phone and let loose another of his patented Twitter tantrums:

This is the single greatest witch hunt of a politician in American history!

With all of the illegal acts that took place in the Clinton campaign & Obama Administration, there was never a special counsel appointed!

The original White House statement itself was likely written by staff. It lacked Trump’s familiar voice that is generally infused with rage and ego. Nor did it directly address the numerous legal breaches that are expected to comprise the core of the investigation. But it did misstate what was already known about his potential collusion with Russia. And the pretense of Trump looking forward to any of this is manifestly absurd. What’s more, it’s peculiar that Trump is accusing Rosenstein of conducting a witch hunt just a couple of months after appointing him to his current post.

However, Trump’s tweets were much more recognizably consistent with the bitter tone for which he is infamous. He lashes out at any criticism as being a deliberately hostile attack on him. And it isn’t just an unwarranted attack, it’s the worst ever. This charge comes the day after Trump told the graduating class at the U.S. Coast Guard Academy that “No politician in history … has been treated worse or more unfairly.”

Needless to say, there have been scores of politicians who have suffered more than Trump. They begin with Abraham Lincoln and continue through to Trump’s predecessor, Barack Obama. And in Trump’s case, at least he was deserving of the treatment he has been receiving. Ironically, his second tweet was an example of two other politicians who were victims of far worse witch hunts. Hillary Clinton underwent repeated and relentless congressional inquiries into her emails and Benghazi. Yet the Republican led inquisition never produced any evidence of wrongdoing. President Obama was accused of being ineligible of office due to ludicrous assertions that he wasn’t born in the U.S. Trump himself led that witch hunt.

Somebody really needs to check on the President. He might be having a stroke. His tweets flagrantly contradict the official White House response to the special counsel appointment. They indicate that he is not actually looking forward to a “thorough investigation.” Neither does he seem particularly confidant that he will be cleared of the potentially impeachable charges. To the contrary, they suggest the fear of a guilty man who maligns the pursuit of justice. And in desperation he points accusing fingers at others to take attention away from himself. But to be fair, he does have good reason to be worried.

2 thoughts on “Greatest Witch Hunt in History? Trump Contradicts His Own Statement on Russia Special Counsel”