In one of the worst weeks for Donald Trump since his election (aren’t they all?) Fox News is once again fulfilling their mission to shield him from any and all criticism. It doesn’t matter to them that Trump has explicitly taken the side of Russia, a nation with hostile intentions toward the United States, and denigrated our intelligence community as having less credibility to him than Vladimir Putin. The only thing that matters is that they advance their propaganda effort on behalf of the White House at all costs. 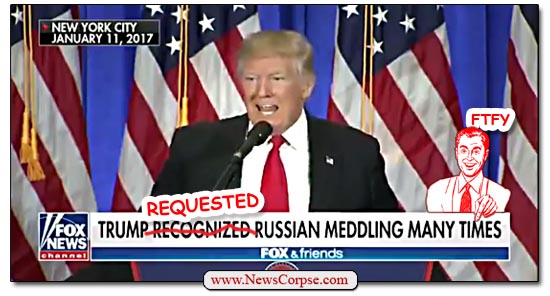 The only problem is that sometimes they are not very good at it. Case in point: On Thursday morning Trump’s favorite Fox News program, Fox and Friends, compiled a little video montage that they intended to serve as proof that the President “recognized Russian meddling many times.” Well, everyone recognized it. But Trump seems to have requested it. Never mind that he has repeatedly refused to affirm Russia’s sole culpability for an extensive campaign of cyber espionage aimed at helping Trump’s candidacy and hurting Hillary Clinton’s. Every intelligence agency with jurisdiction over these matters has come to the same conclusion: it was Russia, and only Russia. And it was ordered personally by Vladimir Putin. What’s more, despite Trump’s weakness on standing up for American interests, he is now known to been fully briefed on Russia’s activities before he was even inaugurated. So he has been bald-faced lying ever since.

Trump embarrassed himself, and all of America, at his meeting with Putin. By stating again that he didn’t see why Russia would have engaged in election hacking, he confirmed where his loyalties lie. He tried to walk back those comments the next day, but no one was buying it. Coming to the rescue now are the “Curvy Couch” potatoes of Fox and Friends. They put together this video of Trump’s remarks that they thought would neutralize the criticism that was overwhelming the White House:

Really? There are three separate clips edited together in that video, and everyone one of them shows that Trump is a liar. In all three he failed to hold Russia accountable for the cyber attacks by interjecting that it might have been someone else and not Russia at all. He said that:

“As far as hacking, I think it was Russia. But I think we also get hacked by other countries and other people.” […and…]

In other words, Trump thinks that it was Russia, except that he also thinks it probably wasn’t. What could be more clear? Snark aside, how can Fox and Trump actually think that this video corrects his abhorrent comments acquitting Putin of all guilt for election hacking? It literally affirms Trump’s belief that Putin is innocent. Fox News is undoubtedly proud of this propaganda clip. Especially after seeing that Trump himself found it so persuasive that he tweeted it to his millions of Deplorable disciples (who will view it as total vindication). It was only one tweet in a flurry that also castigated the “fake news media” as “going crazy,” “wanting war,” and, as always, being “the real enemy of the people.” That’s the overarching theme of the Trump presidency. He regards murderous dictators like Putin and Kim Jong Un as strong leaders whose friendship he craves. But Americans carrying out their journalistic duties as defined in the Constitution are “the real enemy.”