Special counsel Robert Mueller took the stage on Wednesday to clarify that his investigation was not an exoneration of Donald Trump in any way shape or form. While his remarks did not expand on what he previously wrote in his report, they were a spotlight on the most relevant facts that contradict Attorney General William Barr’s dishonest mangling of the report’s conclusions and Trump’s specious claims of innocence. 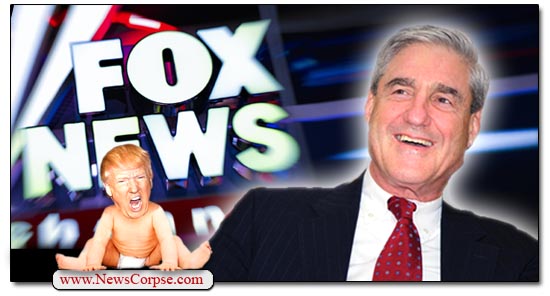 But there is something that is far more devastating for Trump than anything the special counsel said. And that’s the analysis on Fox News after Mueller’s statement. The network immediately turned to their chief political anchor, Bret Baier, for commentary on the unusual and surprising public address by Mueller. Baier wasted no time making the point that Mueller’s remarks would be troublesome for Trump (video below). He said that…

“I was struck by the tone and tenor of those remarks as he laid out his case wrapping up this report. This was not, as the president says time and time again, ‘no collusion, no obstruction.’ It was much more nuanced than that. […] He said specifically that if they had found that the President did not commit a crime on obstruction, they would have said that.”

Baier also blasted Barr’s misrepresentation of the Mueller report saying that it was more nuanced than Barr’s portrayal and “In fact, it was almost exactly the opposite.” That’s the Fox News way of saying that Barr lied through his teeth. But that’s not all. There were other portions of Mueller’s statement that should also worry the White House. Including his explanation for why no criminal charges were brought. Mueller reiterated his opinion that a Department of Justice memo prohibited him from indicting a sitting president. That opinion is rejected by many legal experts and has never been affirmed by any court. But Mueller is a stickler for procedure. Consequently, his decision not to indict doesn’t mean that no crimes occurred, only that he didn’t believe that he had jurisdiction to press charges.

What’s even worse for Trump is that Mueller unambiguously threw the question of criminality squarely into the lap of Congress. He said that…

“Charging the president with a crime was not an option that we could consider” [because] “the Constitution requires a process other than the criminal justice system to formally accuse a sitting president of wrongdoing.”

That’s an explicit reference to the constitutional duties of Congress and its responsibility to initiate impeachment proceedings. Mueller could not be more clear. It emphatically refutes Trump’s tedious and repetitive whining about “witch hunts” and “hoaxes.” But that didn’t stop Trump from issuing the same impotent defense via his campaign that there was “no collusion…no case for obstruction [and that] Trump has been fully and completely exonerated.” Only a confirmed Trump cultist could still believe that.

It’s going to become harder for Trump’s allies and supporters to remain on board this sinking ship. It’s ability to stay afloat has been largely due to the buoyancy of Fox News propaganda. But with analyses like that of Baier – who was joined by Fox’s senior legal analyst Andrew Napolitano, their ultra-conservative contributor Andrew McCarthy, and others – the USS Trump is taking on water at a dangerously high rate. So expect to hear some more frantic gurgling by Trump in the hours and days to come.

3 thoughts on “UH-OH! Fox News on Mueller: This Was Not, As Trump Says, ‘No Collusion, No Obstruction’”