The record of James O’Keefe’s deceptively named Project Veritas is one of pathetically contrived disinformation and deliberate lies. And the reputation of O’Keefe himself is as a recidivist liar whose dishonesty cost him $100,000 in a defamation lawsuit; who was convicted for trespassing in the federal office of a Louisiana senator; and a pervert who tried to lure a reporter onto his “love boat” in a botched sting. 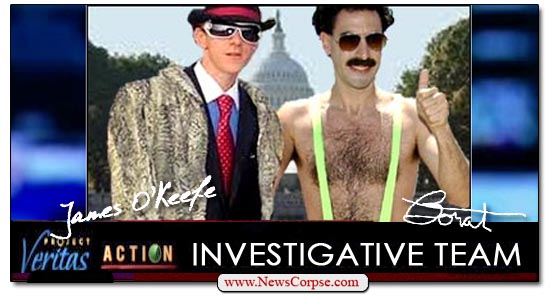 Now O’Keefe is back with a new video that purports to be a bombshell exposé of CNN’s hidden agenda of anti-Trump propaganda. As usual, it’s a complete dud that only exposes O’Keefe’s incompetence and commitment to flagrant falsehoods aimed at maligning any media enterprise that isn’t avowedly right-wing.

In this latest video O’Keefe serves up someone named Charlie Chester, who O’Keefe says is a technical director at CNN. There is no verification of his identity or his employment by CNN, but O’Keefe continually refers to him simply as a “director,” which is deliberately misleading. For the sake of argument, let’s say that Chester is who O’Keefe says he is. Chester’s remarks are a long ways from anything resembling a “bombshell.” Among other things he says that…

“Our focus was to get Trump out of office, right? Without saying it, that’s what it was, right?”

“So our next thing is going to be climate awareness. […] Climate change is gonna be the next COVID thing for CNN.”

Watch O’Keefe’s teaser reel if here you have the stomach for it:

CNN Technical Director Charlie Chester: “Look what we did, we [@CNN] got Trump out. I am 100% going to say it, and I 100% believe that if it wasn't for CNN, I don't know that Trump would have got voted out…I came to CNN because I wanted to be a part of that.” #ExposeCNN pic.twitter.com/QKQdZpOaWc

Oh my. What an explosive set of revelations. Some dude says that CNN was singlehandedly responsible for Donald Trump losing the 2020 presidential election. So it wasn’t because the election was rigged, or because of voter fraud, or the “deep State.” Or the fact that Trump was despised by millions of decent Americans. It was a plot by CNN all along. And this cable news network that the right repeatedly disparages as “failing” was so influential with a majority of the American people that they pulled off an electoral victory with 81 million votes.

It’s notable that all of the allegations directed at CNN in O’Keefe’s video fit the behavior of Fox News much more closely. Their focus has always been to defeat Democrats with propaganda, and to sell fear of the imminent destruction of America by radical socialists, uppity Blacks, and caravans of immigrants.

For the record, this Chester character has no way of knowing what he claims to know. A technical director is not in the editorial loop at a news network. He doesn’t make decisions or attend meetings that are related to the content of any news story. Nor is he likely to have inside information as to the thinking of the editors and journalists at the network. He is a behind-the-scenes technician who keeps the TV machines humming. And the fact that he’d talk to such an obvious shill only affirms that he’s too naïve or foolish or self-serving to be listened to.

{UPDATE: O’Keefe posted a second video of this Chester guy, and it’s even stupider than the first (if you can believe it). He fails to coherently define “propaganda” and demonstrates his ignorance of political strategies while discussing Matt Gaetz, the GOP representative currently being investigated for sex trafficking and drugs].

This is the source that O’Keefe is relying on for his bombshell? This is the source that excited O’Keefe so much that the day before this video was released he tweeted that “Tomorrow you guys at @CNN are going to have a loooooong day.@oliverdarcy @brianstelter @jaketapper This is the most devastating thing you’ve ever seen inside your network. Sleep tight.” Those guys at CNN must be shaking in their boots.

O’Keefe’s pitiful video had a predictable effect on Trump World. Donnie Trump Jr tweeted that “A @CNN director is caught on video admitting that the focus of CNN’s news coverage in 2020 was “to get Trump out of office” & that they engaged in “propaganda” to make it happen. CNN isn’t a news organization, they’re a Democrat Super PAC!!!” Sean Hannity tweeted that “Care to comment Humpty? Have a great day!! @brianstelter.” No one will be shocked that these dumbos would buy O’Keefe’s scam. However, the video was ignored by every reputable news organization.

Speaking of Hannity, he interviewed O’Keefe on Tuesday night. It was a predictably tedious, self-exalting segment that included O’Keefe’s announcement that he will be suing CNN for defamation. Which led to this exchange:

O’Keefe: I think a lot of people should start suing the media for disinformation. It’s disgraceful what they’re doing.
Hannity: I might be filing so myself.

That’s especially rich considering that Fox News is currently being sued for defamation by both Smartmatic and Dominion voting services companies for billions of dollars. And the Project Veritas video is full of potentially defamatory content that could justify suits against O’Keefe. Also in the segment, O’Keefe claims to have won a great legal victory over the New York Times, but in fact the Times merely failed to get a favorable ruling on a motion to dismiss, which is pretty routine in these proceedings.

And if you any Maalox left, here is the segment from Hannity:

This isn’t the first time that O’Keefe sicced his Project Veritas on CNN. In October of 2019, O’Keefe released a similarly weak and unsubstantiated video that made essentially the same criticisms. And despite the fact that there was nothing remotely credible about the project, it triggered a lawsuit by Trump for – get this – false advertising. The suit charged that CNN’s claim to practice “excellence in journalism” was false because they said things about Trump that he didn’t like, but were nevertheless true. The threatened lawsuit, not surprisingly, never came to pass.

You have to wonder how this charlatan can continue to post these feeble stabs at journalism after so many humiliating crash landings. It’s truly an obsession that is driving him to embarrass himself over and over again. You would think that knowing how hard the adults at CNN are laughing at him would cause him to step back. But that would be the mature and intelligent thing to do. So don’t hold your breath waiting for O’Keefe to do it.