Donald Trump spent four years embarrassing America and degrading democracy. And he has nothing to show for it but two impeachments, the lowest approval ratings of all time, and a pile of pending indictments, both civil and criminal. But you know you’ve arrived at rock bottom when your most zealous defenders can only cite your worst personal traits as evidence of your success. 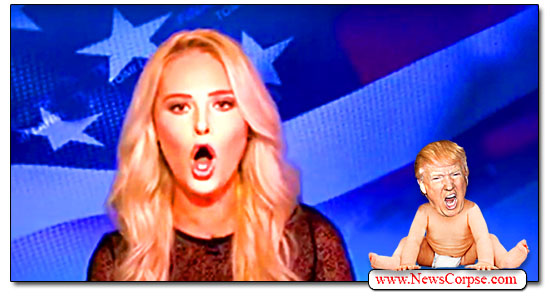 On “Judge” Jeanine Pirro’s Fox News Holler-rama Saturday night, she hosted a couple of shameless Trump-fluffers for an extended veneration of Dear Leader. The theme of the night was, according to a ranting Leo Terrell, that “Democrats and the media are afraid of Donald Trump.” When called upon for her testimony, Tomi Lahren (aka Nazi Barbie) unleashed a bizarre variant of praise for The Donald. Lahren gushed that…

“If I were Donald Trump and I was listening to the mainstream media, I would take that as a clear signal and cue. They are terrified of you Mr. Trump. It’s time for you to run again in 2024 because you’ve got the media on their heels. And there is no better way to know that, and to know that clearly than to know how terrified they are of you. They wanted Liz Cheney. They wanted Mitt Romney. Because they are terrified of “America First,” because that’s a winning message and a winning man.”

The media is terrified of Trump 2024 AS THEY SHOULD BE! pic.twitter.com/FUMwjCzZym

Since when is the ability to incite fear a positive trait for a leader in a democracy? Lahren is actually excited by how scary Trump supposedly is to the majority of the American people who voted against him twice. She must really have gotten off when Trump’s insurrectionist brigades stormed the Capitol and threatened to hang Mike Pence and murder members of Congress.

Fear is the drug that stimulates the right-wing Id. And Trump is the perfect trigger for a flock of frightened followers who can’t distinguish fact from fiction. His every public utterance is filled with hostility. He’s either insulting his innumerable enemies, lying about his imagined achievements, or whining about his perceived victimhood. And it’s all aimed at stirring the innate fears of people who can’t accept responsibility for their own failings, so they need to project them onto others who look different.

However, the assertion that Democrats and the media are afraid of Trump is a feeble fabrication cooked up by desperate losers to make themselves feel as if they have some hidden superpower. No one is afraid of Trump, the person. He was confronted and defeated by the voters last November. And the media has been making progress calling Trump’s lies out for what they are. It is not an expression of fear for the press to report honestly on Trump’s obsessive aversion to the truth. To the contrary, speaking truth to power requires strength. It’s Trump’s embrace of flagrant falsehoods that speaks to his weakness.

There is, however, a justifiable fear of the consequences of reckless, demagogic rhetoric, lapped up by glassy-eyed cultists. That’s what led to the January 6th insurrection. Aberrations like Charles Manson and Jim Jones were not themselves frightening. But their gullible and pliant disciples were capable of horrific acts in the service of their master. And that’s always been the threat that Trump posed. He was never particularly frightening, but his followers are scary as hell. And some of them are regularly on Fox News.