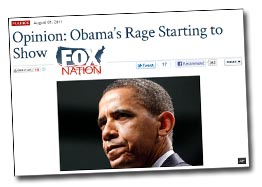 In a featured article today on the Fox Nation, an editorial presents a picture of President Obama that harkens back to an era when African Americans were relegated to tap-dancing, watermelon-eating, entertainers and servants. The article from a Marietta, Georgia, opinion columnist, Melvyn L. Fein, was titled: “Obama’s Rage Starting To Show.”

It’s surprising to read something so overtly racist from a modern, mainstream news source, but leave it to Fox to find it and promote it to a national audience.

The article began with feint praise of Obama as a conciliatory black man, as opposed what Fein called angry “street thugs” like Jesse Jackson and Al Sharpton. But it just got worse from there. Fein initially described Obama in terms that portrayed him as acceptable and unthreatening to whites:

“He was not angry. Far from it, he was affable. With a smile on his face, and a lilt to his voice.”

In other words he was grinning negro, shuckin and Jivin for the folks, and never stirring up trouble like those rabble-rousers who keep clamoring for their “civil” rights.

Fein goes on to assert that all of that was a mask that Obama wore and that “the anger underneath his facade of cordiality has started to show.” As evidence of this hidden anger, Fein cited Obama’s “arrogance” for “summoning” congressional leaders to the White House to discuss the debt ceiling and for the “stipulation” that they bring viable solutions with them. That language would be admired as an expression of leadership in white politicians, but to Fein, with regard to Obama, it was “imperiousness” and “authoritarian.” In Fein’s world it’s unseemly for black men to be seen as issuing orders to white men, even if the black man is the President of the United States.

In an effort to explain what Fein theorized was Obama’s innate rage, he resorted to amateur psychology based on a fictional account of Obama’s past:

“We must remember that Obama was abandoned by his birth father, semi-abandoned by his mother, raised by contentious grandparents, exposed to virulent Indonesian racism before the age of 10 and then subjected to the ignominy of being racially marginalized in Hawaii.

How could anyone escape being irate at such an upbringing? Rage would be the normal human reaction to this sort of abuse.”

In the real world, Obama recalls his upbringing with a mother who loved him dearly and cared for him throughout most of his childhood, interrupted briefly by a period where his loving grandparents stood in for her. He never expressed any experience of racism outside of that that any minority child would encounter in a prejudiced society. Fein’s rantings closely mirror those of Glenn Beck and Mike Huckabee, who believe that Obama harbors some sort of Kenyan, Mau Mau, anti-colonialism, inspired by a father he barely knew. Beck even did his own psychoanalysis of Obama that virtually drips with dementia. Here is an excerpt of my take on Beck’s psycho-escapade:

“Beck’s conclusion is that Obama was so traumatized by abandonment issues related to his parents’ absorption in Marxism that Obama, in retaliation, did what any child would under those circumstances — He became a Marxist. It makes perfect sense. What other choice did he have other than to adopt the philosophy of the thing that allegedly tore his family apart? It is a sad, tragic story, isn’t it?

“Perhaps on tomorrow’s show Beck will tell his own sad, tragic story? The one where his mother abandoned him by killing herself. Obama’s mother went away for a while, but she came back and witnessed her son on an historic path to the presidency of the United States of America. For Beck’s mother only death was sufficient to separate her from her demon seed. What kind of scar does that leave on a boy? Well, in Beck’s case it left a scar that led to dropping out of school, to alcoholism, drug abuse, a failed marriage, a career as an AM radio shock jock, and fame as a hate-mongering conspiracy nut who contributes nothing to society but fear and division.

Fein’s puerile psychoanalysis surmises that Obama’s allegedly troubled past created a false persona wherein, “rather than fight back openly, [Obama] smiled and allowed the insults to roll off his back.” And remember, it’s that Obama that Fein considered to be “gracious” and “intelligent.” As soon as Obama demonstrated any determination to assert the principles in which he believes, and for which he was elected, Obama was transformed into a raving dictator with an inability to love. Fein’s closing paragraph sums up his disturbingly maniacal view:

“[A]s his policies have revealed, our president is more concerned with his own welfare than anyone else’s. This is not a man who loves others. It is a man who is angry at others, including his nation. As alarmingly, it is a man who acts on these impulses.

The rest of us had, therefore, best beware!”

That’s right. Beware, brothers and sisters. Beware the angry black man rampaging across the land with no love in his heart and no knowledge of his “place.” Didn’t y’all like him better before he talked back, when he was carrying your bags and shining your shoes with a big, toothy grin?

6 thoughts on “Shuckin And Jivin: The Kind Of Obama Fox News Racists Like”