With new and increasingly ghastly stories about how Donald Trump has betrayed America coming out every day, his servile toadies in the Republican Party and the rightist press are finding it more difficult to manufacture excuses for his rampant criminality and deceit. But that doesn’t mean they aren’t still trying. 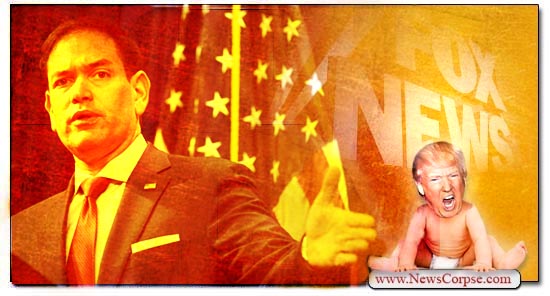 On Wednesday morning GOP Sen. Marco Rubio visited Trump’s Ministry of Disinformation – aka Fox News – to unfurl more of the unabashed BS that he is so infamous for. However, he encountered some unexpected questioning that caused his robo-apologia to malfunction. It’s a condition that has afflicted other Trump-fluffers attempting to absolve Dear Leader of any and all wrongdoing.

During his interview on Fox and Friends, Rubio was asked by co-host Steve Doocy to explain why Trump would ever have sensitive national security materials stored insecurely at his Palm Beach resort hotel/home. Rubio’s response was typical of the cringeworthy alibis emanating from the League of Devoted Trump Defenders:

Doocy: “Highly classified documents at Mar-a-Lago that only a cabinet-level officer or higher could even look at… That doesn’t seem like something you should have in your post-presidential drawer.”
Rubio: “Well, let’s break this down. First of all, we really don’t know. Let’s go back and understand that all this information is coming from one side and one place. and that is sources with knowledge of the investigation. Well, who are the sources with knowledge of the investigation? The FBI and Justice Department. And they are leaking to the media.”

Doocy was putting it mildly to suggest that such documents ought not to be kept in a desk drawer at a hotel that welcomes unvetted guests from all over the world. But Rubio couldn’t even address that relative softball. He dodged the question about the legal and ethical failures by Trump entirely, instead devoting the next two minutes to complaining about alleged leaks.

In other words, Rubio was more worried that Trump had been caught, than by the crimes he committed that put America at risk. Although Rubio did affirm the existence of classified materials at Trump’s resort. By asserting that the info came from “sources with knowledge of the investigation,” he is conceding the legitimacy of the charges against Trump that he’s whining were leaked.

What’s more, the substance of Rubio’s complaints had no basis in reality. He asserted as fact that information had been leaked by the FBI or the Justice Department for political purposes. But he has no evidence of that. There could be other sources for that information, including people who Trump might have shown the documents to, or who participated in moving them to Mar-a-Lago, or had helped him review and catalog what he stole from the White House.

This isn’t the first pitifully lame effort by Rubio to exonerate Trump. On Monday he told an NBC reporter that the whole scandalous controversy was “just a storage issue, [and] I don’t think a fight over storage of documents is worthy of what they [the FBI] have done.” Of course. Because why should anyone be concerned that Trump had illegally taken national security materials from the White House, lied about having them when asked, and even subpoenaed, and stored them where unsavory characters could access them?

RELATED: SEMI-FASCIST? Trump Wants the FBI to ‘Raid’ the House of Joe Biden – AKA the White House

Trump has been making many of the same arguments. He is outraged that the FBI took some personal items from his office at Mar-a-Lago. But he makes no attempt to explain why had more than 11,000 documents that are the property of the United States government. But in his defense, the only reason he doesn’t try to explain it is because he’s guilty, and he knows it. Other than that…

2 thoughts on “Marco Rubio Agrees that Trump Hoarded Classified Documents, But Only Cares that He Got Caught”