During a segment of Happening Now on Fox News, anchor Jon Scott hosted conservative Jim Pinkerton and liberal Alan Colmes to debate the latest pet scandal at Fox. Having abandoned Benghazi after it failed to tarnish President Obama’s standing with the American people, Fox is now harping on the events at the Internal Revenue Service.

One thing that can be said for this pseudo-scandal is that it has united the ire of both sides of the controversy. Democrats and Republicans alike have repudiated those at the IRS who employed politically partisan criteria to determine which organizations applying for tax-exempt status would be subject to stricter scrutiny. But like all of the past scandals, no one has been able to tie this affair to the White House either. And that fact is driving the right batty (or battier than usual).

“Never has the prevailing bias of the media been so closely aligned with the ideological aims and the political interests of the party in power.” 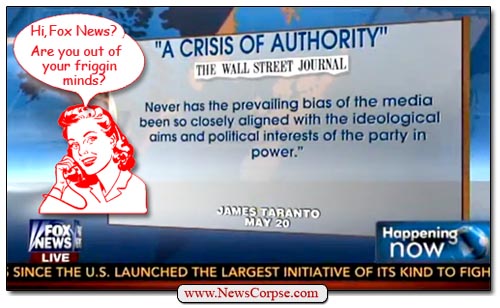 Is that so? Apparently Taranto was in a vegetative state during the Bush administration when the media, and particularly Fox News, was sucking Bush’s Dick Cheney-led propaganda straight from the bottle. Fox was an unabashed cheerleader for the war in Iraq. And they were not alone. Even MSNBC fired Phil Donahue when he was their top rated host due to his skepticism about the rush to war mongering. And does anyone remember the press criticizing Bush for cutting the taxes of millionaires and transitioning the Clinton budget surplus into a deficit?

The truth is that Fox is the first and only major media enterprise that was built from scratch to proselytize on behalf of a political Party. Fox’s devotion to the people and policies of the right extend far beyond merely parroting their agenda (which they do non-stop), but Fox actually employs Republican operatives and candidates in an effort to advance their prospects. And of course, Fox’s CEO, Roger Ailes, was himself a Republican operative before he took the reins of international corporatist Rupert Murdoch’s cable news network.

Adding to the epic irony of this cognition failure is that the anchor, Jon Scott, is hardly one to raise the issue of media alignment with party politics. Scott was caught red-handed reading GOP talking points on the air as if they were his own news reporting. He even included a graphic that contained the same typos that were in the original Republican memo. And now he has the gall to cast aspersions of bias on what he describes as the liberal media, but without offering a single example.

The remainder of the debate was a mashup of inane accusations that liberals were not condemning the IRS misbehavior. Colmes had to repeatedly prove that they were, eventually offering to write it in blood after Scott and Pinkerton seemed oblivious to the facts Colmes presented numerous times. And when all else failed they raised the specter of George Soros who had nothing to do with any of this. Wingnuts just go through withdrawal if they don’t say his name every two minutes.

Here’s the video for your amusement:

And for a little added fun, check out these screen grabs from the segment where Fox featured Tea Party protesters with signs saying “America is a Christian nation,” and “911 was an inside job.” Way to push the doctrine, Fox. 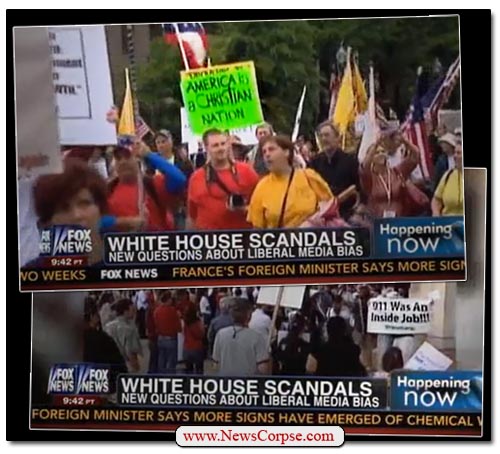