Tomorrow’s debate between Hillary Clinton and Donald Trump could have a profound impact on the race going forward. Or it could be an entirely irrelevant sideshow that is forgotten by Wednesday. The press has already decided that Clinton has a more difficult task living up to expectations that the press itself creates. While Trump is expected only to remain upright and avoid drooling or blurting out profanities. 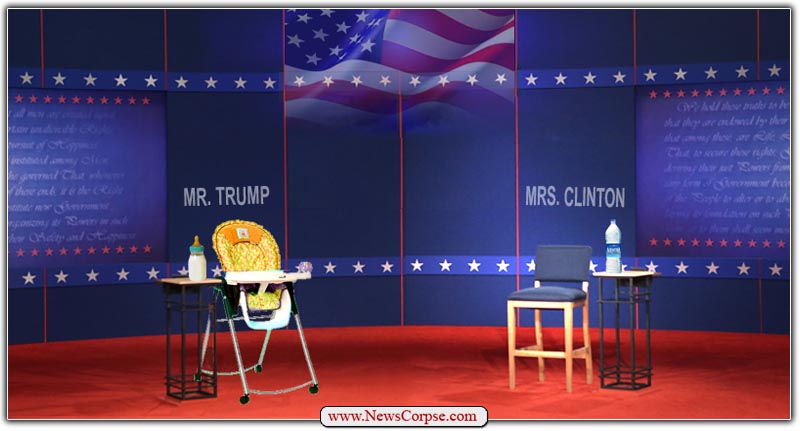 In advance of the big night, Trump continues to hide from challenging questions. This despite, or due to, some potentially ruinous reports of his dealings with Russian oligarchs and illegal use of funds from his “charitable” foundation. As a result, Trump and his handlers are limiting his exposure to the media. This makes the debate one of the few times that he will face questions from anyone other than Fox News in over four weeks.

Since August 25, Trump has given only three interviews with non-Fox outlets. Contrast that with the thirteen interviews he’s given Fox, including several episodes of Hannity where he consumed the entire hour. Media Matters found that the airtime Hannity alone provided Trump since he became a candidate was worth more than $31 million in free publicity. Hannity even appeared in an ad for Trump, which resulted in a gentle reprimand by his bosses at Fox News.

In addition to his aversion to interviews, Trump has also not held a press conference in nearly two months. During the summer Clinton was hounded by conservatives for not holding a press conference. Now the press is traveling on her plane and it’s Trump who is evading media scrutiny. But no one on the right has any problem with that anymore.

What’s he afraid of? Trump is on Fox News almost daily, but is too scared to be interviewed by anyone outside that safe zone. His fear of media that isn’t expressly adoring raises questions about his ability to face confrontations with foreign leaders or even contentious members of Congress. Will he hide in the Lincoln Bedroom to keep from having to face Angela Merkel or Nancy Pelosi?

Even Fox News has noticed Trump’s cowardice. Last July Howard Kurtz reported that he was “refusing to appear on many television outlets” and that his advisers were “no longer notifying him of every interview request.” So his babysitters are keeping him in the dark and making decisions that deliberately shun his participation? Imagine how horribly that weakness would play out in the Oval Office.

What’s more, by cowering in the Fox bunker Trump limits his exposure to only people who are already supporting him. If he expects to expand his base he won’t do it by preaching only to the Fox choir. Studies show that Fox News viewers are more reliably right-wing voters than any other demographic group, including conservatives, white evangelical Christians, and gun owners. Another study revealed that, of those who cite Fox as their main source for news, 94 percent identified themselves as Republicans.

Anticipating difficulty, Trump has spent the last few weeks working the refs. Which amounts mainly to whining about the unfairness of the process. He complains that the election is rigged, the media is rigged, and the debates are rigged. He has railed against the moderators who he says are biased against him. For the record, the moderator of the first debate is NBC’s Lester Holt who is a registered Republican. The third debate moderator is Chris Wallace of Fox News.

Consequently, the potential impact of the debate rests primarily on the opportunity for more voters see Trump outside of Fox. That could be the death knell for his campaign. He’s not an especially endearing figure. However, it’s safe to predict that Fox’s debate analysis will conclude that Trump beat the pantsuit off of Clinton. No matter what actually happened. It’s what their audience expects and what they’re paid to do. As for Little Donnie, he will declare he victory even if he spits up blood and involuntarily flashes a sieg heil salute.