If you didn’t already believe that we’re living in a bad parody of America, this news should clinch it. The awful names that have been floated for posts in the Trump administration defy reason. Most have no experience at all in the fields for which they were chosen or are being considered. Many represent 180 degree flip-flops from the promises Trump made throughout his campaign. They consist mainly of politicians, Wall Street barons, and fellow billionaires. If this is “draining the swamp,” apparently the swamp drains directly into the White House. 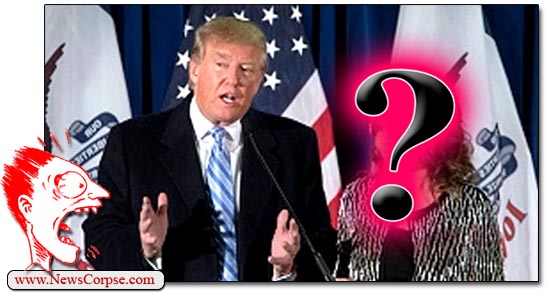 However, the newest name to surface from the Trump Tower of Babbling is especially confounding. ABC News is reporting that Sarah Palin is under consideration for Secretary of Veterans Affairs. The only question is: WHY?

The fact that Trump could seriously consider Palin for this job is further proof that he is dangerously incompetent. It reveals conclusively that he harbors some deep hostility toward veterans. Otherwise, how could he entertain this half-term governor, failed VP candidate, reality TV host, and fired Fox News contributor? She has demonstrated no skills that would prepare her for managing the largest of all federal agencies. Particularly one that is in dire need of reform and competent management.

Like Trump, Palin has talked a lot about veterans. but has shown little aptitude for resolving problems. In her own family she has a son who served in Iraq, but has also been arrested for beating up his girlfriend and wielding an AR-15 rifle while intoxicated. And somehow she blamed that on President Obama. It didn’t take long, though, to hype herself on Facebook for the VA gig as soon as word broke.

Palin may be the perfect symbol for the Trump administration’s commitment to the needs of veterans. After all, he held a phony telethon to raise money for veterans when he wanted an excuse to ditch a GOP primary debate. Then he failed to deliver the funds he claimed to have raised. He is also known for maligning vets with PTSD as weak people who couldn’t “handle it.” And who can forget his insult to John McCain, and all POWs, for having been captured.

Palin’s consideration might just be a bone thrown to an early supporter (and she is not the only candidate). Or she may be being pushed by Trump advisor, and white nationalist, Stephen Bannon. In 2011 Bannon produced a crocumentary about Palin that went almost immediately to video – and the bargain bins at that. Whatever the reason for her name surfacing as a possible VA chief, it is bad news for veterans. She has no skills that suggest an ability to perform the job. She’s just another Fox News leftover who comprise a surprisingly large percentage of Trump’s candidate pool. That’s what America gets for electing a reality TV game show host to the presidency.

2 thoughts on “Donald Trump Absolutely HATES Veterans, And His Latest Candidate For VA Chief Proves It”