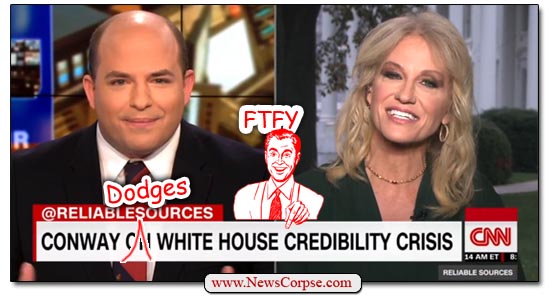 Conway’s interview (video below) was twenty minutes of unparalleled evasion and blatant propaganda. Sporting a plastered on simulated smile, she dutifully misrepresented the truth. And all the while injecting rancorous venom into the usual victims of her wrath. The segment began with a timely question concerning Donald Trump’s abysmal public image:

Stelter: Given President Trump’s historically low approval ratings, what specific steps are you and your colleagues taking to try to repair Trump’s credibility?
Conway: Well Brian, I think that’s the usual hyperbolic opening to one of the CNN segments. But let me tell you about the numbers that matter to Americans.

Whereupon Conway rattled off statistics about jobs and the stock market that Trump had absolutely nothing to do with. Congress has not passed, nor has he signed, a single bill related to the economy. The country is still operating on President Obama’s last budget. Stelter noted that morsel of reality saying that “The American people are not giving him credit for the economic boom according to all of the polls.” Conway’s glassy-eyed response: “Yes they are.” Is she on drugs? After that delusional comment she drifted off into some robotic criticisms of CNN. The fact that she cannot acknowledge that Trump has set new records for disapproval is typical of the tunnel-blindness of the administration.

This exchange continued with more questions from Stelter that Conway refused to answer. Each reply clumsily stumbled off to unrelated issues, most of which involved the GOP’s favorite fetish, Hillary Clinton. Conway employed the Clinton dodge repeatedly citing last year’s election and even reviving Benghazi. On the infamous Trump Dossier, Stelter interrupted Conway to admonish her for dismissing it as “completely unverified.” “Parts of it have been verified,” he corrected her. “That is misinformation you’re spreading on my program and I don’t appreciate it.”

Stelter also called Conway out on her obvious evasionary tactics saying that “I think viewers see what you’re doing – pivoting. When I say Russia, you say Clinton. It’s part of the strategy” She disputed that, then went straight back to bashing Clinton. And when she wasn’t bashing Clinton, she was bashing CNN. She made CNN the subject of debate throughout the interview, but Stelter wasn’t laying down for it. When she went directly at the unsupported charge of political bias, Stelter made the perfect response:

Conway: Brian, why not just say “Look. It’s in our commercial interest at CNN to be anti-Trump. We’re profitable if we’re against the President. Most of our viewers are against the President.” Just own it. Don’t you think that would be more credible for CNN?
Stelter: I understand that you don’t want an adversarial media. You just want everybody to be like Fox News.
Conway: No, that’s not true. Stop being so jealous of Fox News, Brian, and their ratings.

Now ratings are suddenly important again? When it had to do with Trump’s pitiful numbers, they were totally irrelevant. More to the point, Conway didn’t dispute that Fox News is a non-adversarial, pro-Trump, state-run network. She simply bragged about their status in the television market (which is losing ground to MSNBC). This interview was only useful as a lesson in how to badly evade a reporter’s questions. Conway’s failing grades on style were matched by her lack of substance. It’s no wonder that she rarely appears anywhere but on Fox News. And CNN would be justified in barring her from future appearances on the grounds that she only disseminates useless, self-serving bullshit.