Donald Trump and the Republicans in Congress are hurtling headlong into passage of tax bill that will materially alter the tax code in ways that harm most Americans. It is flagrantly biased in favor of corporations and the wealthy with toxic provisions that will sabotage healthcare and cripple Social Security and Medicare. The GOP refused to hold hearings on the bill or even allow Democrats to review it prior to voting. Much of it was written by corporate lobbyists. And without any justification for their haste, Republicans are ramming it through before the already strong opposition becomes impossible to ignore. 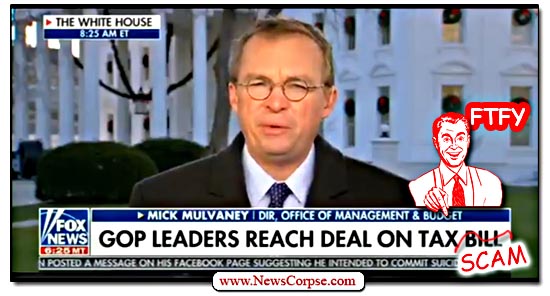 As usual, whenever Republicans require a boost in propaganda they turn to Fox News. They know that they can present whatever bullshit they want and that there will be no one to challenge their lies. They took advantage of that Thursday morning when they sent Trump’s director of the Office of Management and Budget, Mick Mulvaney, to the studios of Fox and Friends to pimp the tax bill. He received precisely the welcome that he expected as co-host Steve Doocy offered up a softball for Mulvaney to hit out of the park. Surprisingly, Mulvaney took a wild swing that landed in foul territory (video below):

Doocy: People don’t like to pay taxes so you would think that this would be a good story for you. And yet, Mick, the Quinnipiac poll came out and shows that fifty-five percent of Americans don’t like it, as opposed to twenty-six percent who do. Can you explain to me why people don’t like the idea of a tax cut?
Mulvaney: Sure, because if you turn to any channel besides this one, all you’re going to hear is bad news about this particular bill. […] No one is focusing, as you folks do, on what’s good for people in this bill. So if you get your news here, you probably like it because your focused on what’s good for you. But if not, you don’t.

So the only reason Mulvaney had for people not liking the bill was that they weren’t watching enough Fox News. Or worse, they drifted from their “news” teet at Fox and were exposed to actual facts and honest scrutiny. Doocy was taking a chance by citing the Quinnipiac poll which he correctly quoted as showing a historic disapproval rating, especially for something being pitched as a tax cut. The poll provided an explanation for that which Fox News left out entirely. Nearly seventy percent of those polled said the bill favors the wealthy and only twenty-one percent think that it will help the middle class. In other words, people can see through the GOP spin and recognize a fraud when it’s right in front of their faces.

However, what was most interesting about Mulvaney’s response was that he explicitly admitted that Fox News was a pit of partisan bias where viewers would get only the conservative perspective peddled by the White House. He praised the “Curvy Couch” potatoes for being sycophantic hucksters upon whom he could rely to spew the government line. Just like state-run TV outlets are supposed to do. Heaven forbid that the American people might ever get an unbiased analysis of this bill that contained actual facts derived from independent experts. That isn’t what Fox News was created for, and it surely isn’t what they did this morning. Welcome to the American Pravda, now proudly out of the propaganda closet.

2 thoughts on “Trump Shill: If You Get Your News From Fox News You Probably Like the GOP Tax Scam”