Rep. Eric Swalwell of California has distinguished himself as one of the most effective voices opposing the criminal activities of Donald Trump. He was outspoken during the investigations of Trump’s sordid associations with Russia during the 2016 presidential campaign. He was one of the House managers of Trump’s unprecedented second impeachment. And he is even suing Trump for his role in inciting the January 6th insurrection in Washington, D.C.

If that isn’t enough, Trump was caught unlawfully spying on Swalwell and other Democrats. So naturally Trump’s Ministry of Disinformation (aka Fox News) is fighting back on behalf of Trump. And they are doing so with their customary dishonesty, rumor mongering, and vile insinuation. An article on the Fox News website engages in an outright smear campaign that relies solely on distortions and innuendo. The headline feverishly shouts that “Swalwell spent thousands of campaign dollars on booze and limo services, $20K at hotel where his wife worked.” It’s opening paragraphs read that…

“Prominent Democratic Rep. Eric Swalwell of California appears to have spent tens of thousands of campaign dollars on booze and limousine services, as well as over $20,000 at the luxury hotel where his wife used to work. The tens of thousands of campaign dollars include limo services, luxury hotels, high-end restaurants and alcohol delivery services over the course of the second quarter, according to FEC records reviewed by Fox News.”

The article itemizes several examples of what it implies are improper expenditures. However, it doesn’t offer a shred of evidence that any of the payments were actually improper, or even irregular. The funds all came from a campaign account and they all appear to be common expenses associated with campaign events. Virtually every politician holds fundraisers where they hire banquet halls and caterers to schmooze potential donors. And all of the expenditures were properly reported with the Federal Elections Commission.

Perhaps Fox News has a problem with how campaigns are funded by wealthy donors and corporations. That would be a fair criticism. But they have never mentioned it before. They also have never made similar complaints about Republicans who do exactly the same thing. What’s more, Democrats like Swalwell are the ones who advocate for campaign reforms that would remove or reduce this sort of fundraising, but Republicans staunchly oppose those reforms.

The article also insinuates that there was something untoward about hotel expenditures at a Ritz-Carlton in Half Moon Bay where Swalwell’s wife was employed. But that employment ended two years ago and neither she nor the congressman would benefit in way by choosing this hotel. And it happens to be located on a scenic part of the California coast just a few miles from his district, making it a reasonable site for a campaign event. Once again, Fox News is trying to whip up a phony controversy.

It shouldn’t come as a surprise that Fox News would seek to malign a truthteller in Congress who refuses to be bullied by Trump and his confederates. And that includes Donnie Trump Jr, who posted a disgusting tweet (which will not be linked to here) in which he lied about everything other than the fact that Swalwell is still on the House Intelligence Committee: 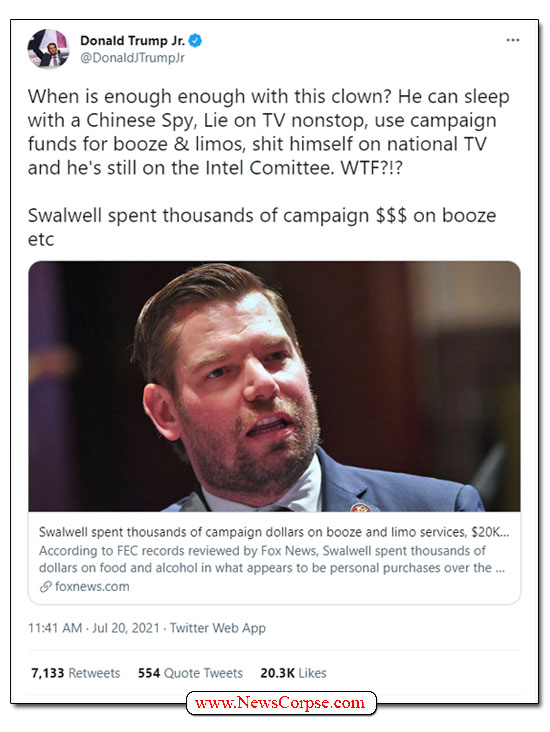 UPDATE: Rep. Eric Swalwell tweeted a link to the reposting of this article on DailyKos:

Hammer finds nail. @dailykos calls out @foxnews for spending 25 hours a day lying about me and anyone who opposes Trump.

2 thoughts on “Avenging Trump? The Lying Fox News Crusade Against Eric Swalwell is in Full Swing”